Even though Germany is one of the most populous countries in Europe, it still contains forests, mountains, and quiet natural places. If you pay attention, you’ll quickly find that you’re not alone out there. Germany also has a great deal of wildlife that can be safely spotted!

“Wilderness” probably isn’t the word that comes to mind when you think about Germany. If you’ve been here for a while (and even if you haven’t), you might think first about autobahns, tidy villages, or big cities like Berlin and Munich.

But Germany still has wild spaces, and plenty of them. Chances are, in fact, that you’ve got a forest within walking distance of where you live. And if you can find a forest, then you can find some excellent wildlife.

Before you start searching, always remember that the animals you find in the wilderness are WILD animals. Which means that you should never approach them, even if they look really cute.

Here’s a short list of creatures for which to keep an eye out. 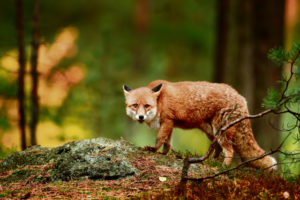 Foxes are a joy to spot. They’re cute, sleek and definitely afraid of humans. They also like pastures, fields, forests, and even village edges. Keep a lookout during afternoon walks. It also helps to be quiet and dog-free.

The European hare is massive, as far as rabbits go, and possesses a towering pair of ears. When they bound off after spotting you, it’s also impressive to see how far they can jump. Take care, though, if you’ve got semi-excitable dogs. They may well drag you down if you’re not careful. Or you might not see them for a while if they’re off the leash.

These are some of the coolest animals you could hope to see in the wild…from a distance. German wild boar can grow to be quite large. They’re also wily and can be really aggressive if they feel confronted.

Though wild boar are generally elusive (remember, they’re clever), they are frequently sighted all over Germany, even in cities. Also good to know: they are nocturnal creatures, so keep a close watch along forested roads when you’re driving in the evening. 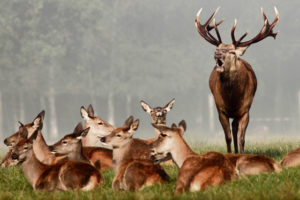 Though deer are incredibly common in most parts of the United States, they’re less ubiquitous in Germany. This relative scarcity makes it all the more interesting when you see one! Red deer can frequently be seen in fields, so keep an eye out for doe herds or the occasional buck if you’re walking along a ridge, or anywhere that gives you good long-distance views.

During the past two thousand years, German wolves were hunted to the point that they were pretty much nonexistent by the year 2000. Apparently, no one was particularly fond of large, intelligent wild dogs that hunted in packs.

But things are slowly beginning to change, especially in the east. Wolves were reintroduced about twenty years ago, and their numbers have been steadily growing. There is no real indication that they’re anywhere near the western part of Germany, so you’ll have to travel if you want to see one in the wild.

Germany has a ton of cool birds, including hawks, falcons, and eagles (especially in the mountains). Barn owls and short-eared owls can often be seen in the KMC. Look for them at dusk. But even ordinary birds, like crows or magpies, can be highly entertaining to watch, especially if they’re battling over territory.

There are also many different kinds of smaller mammals that are unique to this side of the Atlantic, like European pine martens or the wonderfully large-eared European red squirrel.