Why so blue? History of Air Force service uniform

The Air Force service dress worn today has gone through many changes over the years.

Originally, members of the Air Force were allowed to wear the olive green uniform of the Army Air Force until June 30, 1952.

The first Air Force-specific service uniform was created in 1949, called the winter blue shade 84 service dress uniform. This uniform differed from the Army Air Force’s olive uniform by removing the waist belt, revising the color, and adding a black stripe across the wrist, instead of a brown stripe.

This uniform lasted for 16 years and was replaced by the blue shade 1084/1549 uniforms, which changed the material and color of the service-dress uniform.

In 1969 the Air Force implemented a switch to the Gen. John P. McConnell service-dress uniform.

During its 25-year tenure as the Air Force’s uniform, it began going through transformations that led to the uniform we currently use.

Modifications included using one shade of blue for winter and summer coats, insignia changes and adjustments in material. 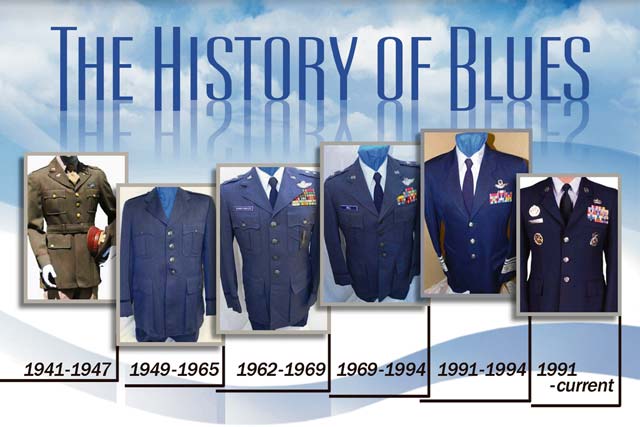 The uniform went through its third change in 1991, when Gen. Merrill A. McPeak, 15th chief of staff of the Air Force, modified the style completely. The uniform went from four buttons to three, epaulets were removed and the four pockets were removed, being replaced with one left breast pocket without a flap.

Additions to that uniform included switching the image on the coat buttons to resemble those of the U.S. Army Air Corps wings and star and officer rank was worn on the sleeve.

The McPeak uniform lasted only three years before it was replaced, which is the uniform worn today.
The retrofit service-dress uniform took nearly 50 years to come out, multiple changes to the style and material of the uniform, but it has lasted for 19 years.

Tradition as to when the service dress is worn has been modified throughout the years as well. Recently, the policy was changed; giving wing commanders the ability to decide when their Airmen wear their blues.
For members of the 86th Airlift Wing, blues Monday will return the first Monday of each month from May through October this year.