Year in review: Another historic year for AMOW

The 521st Air Mobility Operations Wing has accomplished another historic and defining year for the en route.

Coming off the heels of Operation ALLIES REFUGE and ALLIES WELCOME in 2021, Airmen of the 521st AMOW were accustomed to an unprecedented pace of operations.

Their no-fail role again came to the spotlight many times throughout 2022.

“This year the 5-2-1 was not defined by a single moment of greatness,” said Col. Dan Cooley, 521st AMOW commander. “Instead, it was defined by our Airmen working hard to support our nation, allies and partners over 365 days.”

Leading up to and following Russia’s unprovoked invasion of Ukraine in February 2022, the 521st AMOW postured to support North Atlantic Treaty Organization (NATO) allies and partners.

As the Department of Defense’s strategic air transport organization in this theater, the 521st AMOW quickly provided a series of inter-theater strategic airlift missions for military members and cargo moving to bolster Europe’s Eastern flank.

“The flash to bang was quick,” said Col. Jens Lyndrup, commander of the 721st Air Mobility Operations Group. “We had to get things moving immediately and move them fast.”

These herculean efforts to move large quantities of personnel and equipment across theaters at short notice, demonstrated the key capabilities the 521st AMOW has long offered the U.S. Transportation Command and the DOD. 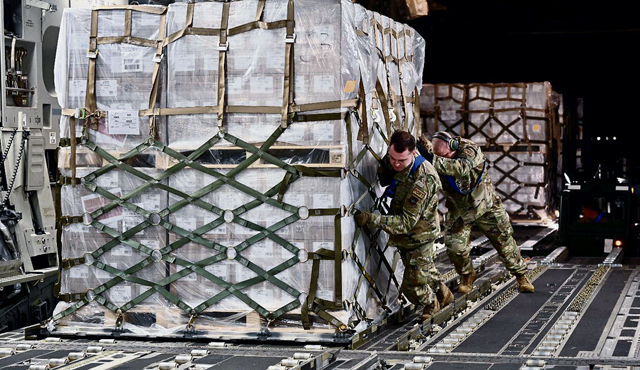 Because AMOW personnel are already stationed in theater, they can deploy rapidly to the point of need, offering options to Air Mobility Command and USTRANSCOM as they determine how to sustain a long-term presence.

“That is the beauty of the AMOWs,” said Lyndrup, “We’re already here in the fight, and we have built-in partnerships with other units in the area of responsibility.”

The first 521st AMOW members moved out from Ramstein AB on February 4. The team of 36 aerial porters and maintainers gained full operational capacity the very next day.

On February 6, the first C-17 aircraft arrived with elements of the 82nd Airborne Division’s Immediate Response Force. 521st AMOW Airmen remained at the center of events for the next two weeks.

The Russian invasion began February 24, and the 521st AMOW and its partners began another three months of surge operations.

“The magnitude of what was accomplished is not lost on me or my Ukrainian counterparts,” said Lt. Col. Matthew Stewart, 435th Contingency Response Squadron commander. “All our international and joint partners have voiced their gratitude and expressed how impressed they were that we could take an extremely dynamic environment and turn it into an organized and streamlined operation.”

At the end of May, security assistance operations transitioned to a longer-term construct, and the last of the 521st AMOW members returned to their home stations.

In total, elements of U.S. European Command, including AMOW Airmen downloaded 1,079 flights, including a peak of 24 in a single day. Over 33,000 tons of cargo came through the station, as well as 8,217 passengers.

Ramstein as an operational hub

Ramstein AB has traditionally been the DOD’s main airlift hub for operations in Europe, and this proved true yet again in the invasion response.

A significant amount of cargo came to Ramstein through ground channels, leading to a greater need than ever for the AMOW to be closely tied in with its Army partners.

As members of the 82nd Airborne Division arrived to Ramstein, the 721st APS handled the logistics of directing them to points across Europe, while at the same time continuing cargo movements.

The first major lift from the hub was in early March when the 521st AMOW moved 594 tons of materiel and 100 associated passengers across 19 missions.

Among these massive cargo movements, the 521st AMOW supported the movement of Presidential Drawdown Authority cargo. PDA missions allow the delivery of equipment to Ukraine by drawing down from DOD stocks without going below U.S. readiness requirements.

This movement roughly totaled the amount of rounds that all U.S. Army towed and self-propelled Howitzer Artillery Battalions shoot in an average two-year period.

Overall, 521st AMOW units on Ramstein supported 130 missions in the movement of 1,387 passengers and 1.1M pounds of cargo to multiple locations supporting Ukraine.

In parallel with personnel and equipment, aircraft moved around and into the European theater.

“At all of our nodes, we have strong, interdependent relationships with host units, necessary for operational success,” said Cooley.

Several en route stations saw the arrival of new types of aircraft. KC-10 Extender tankers arrived at Royal Air Forces Mildenhall, United Kingdom, where the 727th AMS provided care and feeding, facilities, and administrative support for the AMC detachment members prior to their rotation to Spangdahlem. The 727th AMS also enabled rapid deployment of the 352nd Special Operations Wing when it was called upon for theater requirements.

The 726th AMS at Spangdahlem provided parking, facilities, and fleet services for the rotating KC-10 aircraft and later a KC-135 Stratotanker detachment staged in theater.

In addition to fighter support, 724th AMS enabled the movements of their U.S. Army neighbors at the 173rd Airborne Brigade.

In Spain, the 725th AMS, located on Naval Station Rota, led an enhanced team of additional forces at their detachment on Morón Air Base, Spain, to support the first AMC KC-46A Pegasus Employment Concept Exercise.

Because this year’s seasonal CORONET rotation took place at the same time as enhanced operations across the theater, the 725th AMS Det-1 coordinated the reception, communication, air ground equipment, and facility support required for the pop-up tanker detachment. A team of personnel from the 728th AMS at Incirlik Air Base, Turkey, deployed to Morón AB to provide additional manpower for aerial port operations.

In late May, in response to a critical domestic production shortage of baby formula, the President of the United States announced Operation FLY FORMULA to import formula from overseas and onto store shelves.

Initial planning intended to use DOD contracted commercial airlift; however, military airlift and the AMOW’s en route system offered unmatched immediacy and speed. The President announced the operation on May 19, and less than 72 hours later a C-17 aircraft offloaded pallets of infant formula onto commercial ground transport at Indianapolis International Airport. Enabled by 86th Security Forces Squadron, 86th Vehicle Readiness Squadron, and others, the 521st AMOW load and launched the aircraft from Ramstein AB less than two days from official tasking.

After several months of providing aid from the United States to partners and allies abroad, the 521st AMOW, total force mobility aircrew, and mission partners on Ramstein AB were proud to deliver humanitarian support from Europe to American families back home.

All subsequent missions took place on contracted airlift facilitated by the U.S. Department of Health and Human Services (HHS).

According to a White House press release on September 29, Operation FLY FORMULA had transported more than 97.9 million eight-ounce bottle equivalents to the U.S — an effort initiated and accelerated by 521st AMOW Airmen.

Other significant events across the wing and beyond Ramstein AB include: the inactivation of the 5th Expeditionary Air Mobility Squadron on Ali Al Salem Air Base and Al Mubarak Air Base, Kuwait; the expansion of AE capabilities at the AMOW’s operating location at Camp Lemmonier, Djibouti; the annual Port Dawg Rodeo; the Wing Change of command; the 8th Expeditionary Air Mobility Squadron humanitarian aid to Pakistan after the country experienced historic levels of flooding; the 727th AMS bringing back the Patriot Express rotator to Royal Air Force Mildenhall and community; the seamless transition to AFFORGEN at multiple nodes; and the 725th AMS swift and diligent response to a tornado on NAVSTA Rota.

As the wing approaches its 15-year anniversary, Airmen of the 521st AMOW will continue in 2023 to craft war-ready Airmen, drive deliberate transformation, and execute Rapid Global Mobility.

“I’m extremely proud of what this wing accomplished in 2022,” said Cooley. “In 2023, our Airmen will become more lethal, we will transform in order to dominate future air mobility logistics, and we will prove to be the DOD’s unfair advantage in any fight. With Operation MOBILITY GUARDIAN around the corner, let’s show them what we’ve got. Let’s go!”