75th Anniversary of D-Day: A time of celebration, remembrance

Starting June 6, a weeklong series of parades, re-enactments, speakers and memorial services throughout Europe will commemorate the 75th Anniversary of D-Day, the day Allied forces landed on beaches in Normandy, France, and began liberating German-occupied France from Nazi control. The event is likely to attract more than 30,000 veterans and their families to remember the sacrifices made June 6, 1944. 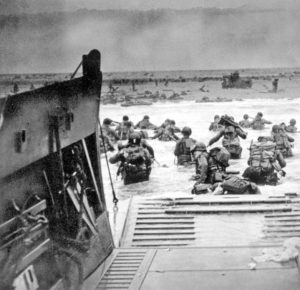 The 75th Anniversary is both celebratory and reverent as remembering our fallen is a critical cultural experience. The event allows younger generations to tie into the past by talking with veterans who experienced this moment in history and walk the beaches where their grandfathers once stood. Event participants get to experience the sounds, smells and visuals through memorials, museums and places where the end of WWII began.

Planning for the invasion of north-west Europe began in January of 1943 and was called Operation Overloard. The actual D-Day landings were code-named Operation Neptune. The five landing zones for D-Day were Gold, Juno, Sword, Utah, and Omaha beaches.
Planning and coordination of the mission took time and required all of the Allied partners. The British second army was responsible for Gold, Juno and Sword beaches and the U.S. First Army was responsible for operations on Utah and Omaha beaches. For U.S. Forces it was essential to secure critical landing areas to move supplies and troops forward.

A great deal of intelligence gathering, aerial photography, cartography and other skills went into identifying an area where coastal geography allowed for landing tens of thousands of men, hundreds of vehicles and acres of logistical supplies. As about 36 divisions deployed into France, Allies needed to secure a major port to offload 20,000 tons of supplies and equipment every day. The landing zone needed a good network of roads in order to facilitate pushing logistics forward into battlefields. The landing beaches needed to be weak points in the enemy defense and within combat radius of Allied bombers, fighters and ground-attack aircraft flying from the U.K.

The first wave of troops included U.S. engineers who cleared mined posts, barbed wire, hedgehogs and log ramps. Omaha beach was the most heavily defended and carried the highest casualty rate that day. About 156,000 Allied soldiers landed in Normandy, and there would be nearly 10,000 casualties.

Artists created phony airfields, blow up tanks and gliders as false units to deceive the enemy so they would not expect the landing at Normandy. “Task Force Mason” was sent ahead of troops with a mission near the village of Trévierés. At dawn, a French farmer came to check his cows and saw the cows were pushing an American tank around his property. The unit detained the farmer so they would not be discovered.
General Dwight D. Eisenhower was appointed the Supreme Commander of the Allied Expeditionary Force in December 1943. He inspired the troops, publishing the General Order that prepared them for the fight. He famously wrote, “The eyes of the world are upon you. The hopes and prayers of liberty-loving people everywhere march with you. In company with our brave Allies and brothers-in-arms on other fronts, you will bring about the destruction of the German war machine, the elimination of Nazi tyranny over the oppressed peoples of Europe, and security for ourselves in a free world.”

All of the services were important that day, but the importance of air power cannot be stressed enough. Allied air forces completed months of missions targeting the industrial complex and slowing down the movement of troops and supplies to the enemy. Air power was a critical component in establishing land and sea operations in the area.
On D-Day, Allied air forces controlled the skies, dropping troops, supplies and equipment, and grasping quick control of critical areas to aid the flow of resources. Eisenhower named the Douglas C-47 Skytrain along with the jeep, the bazooka and the atomic bomb as the four weapons that won the war.
Approximately 925 C-47s were used to tow Waco CG-4 gliders. More than 4,000 airborne forces went over on D-Day and D+1 (June 7, 1944) in 500 gliders. The pilots who flew them had crossings and landings every bit as hazardous as those hitting the beaches behind them.

Troops were due to land before dawn. This type of landing had never been attempted before in darkness. The U.S. Army’s 82d and 101st Airborne Divisions dropped west of Utah beach. The 82d Airborne Division occupied the town of Sainte-Mère-Eglise by 4:30 a.m. making it the first town liberated in the invasion. Many gliders wrecked on the small Normandy fields, but losses were not excessive and the mission was a success. The 37th Troop Carrier Squadron flew C-47 aircraft on D-Day. The unit is now the 37th Airlift Squadron stationed at Ramstein Air Base.
The 37th AS flew airborne assaults on Normandy. During World War II they were awarded Service Streamers for World War II American Theater. They were awarded Campaign Streamers of Egypt-Libya; Tunisia; Naples-Foggia; Rome-Arno; Normandy; Northern France; Rhineland and Central Europe. They received Distinguished Unit Citations for: Middle East, Nov. 25, 1942 to Aug. 25, 1943 and France June 6 to 7, 1944. The 37th TCS “Bluetail Flies” were very active during World War II and they provided necessary support for assigned operations.
As a tribute to D-Day, a few of the 37th AS C-130J Hercules aircraft are currently painted with black and white invasion stripes. Invasion stripes were first authorized on April 18, 1944 and helped the Allied forces identify one another from enemy forces. The troop carrier squadrons also had codes so that they could be identified by Allied forces. The 37th TCS was designated with the combination W7 as their code.

The Supreme Headquarters Allied Expeditionary Forces report that was published between June 6, 1944, through May 8, 1945, credited Allied air power as a significant force saying, “In the vent, German air might was thoroughly dominated by D-Day and we were free to apply the immense strength of the Allied air forces in the manner we wished and to launch the invasion confident that our plans could not be seriously upset by the German air force. In addition, air bombardment had disrupted the German communications system, immeasurably aiding our ground forces by impeding enemy movements.”

After the invasion, the U.S. First Army established a temporary American Cemetery, St. Laurent Cemetery, on June 8, 1944. On July 18, 1956, the site in Colleville-sur-Mer, France, was dedicated as the Normandy American Cemetery. This cemetery contains the graves of 9,380 military members who died serving their country during D-Day landings and further operations. There are also 1,600 names of the missing on the walls. It is one of 26 permanent American burial grounds and 30 memorial sites, monuments and markers on foreign soil.