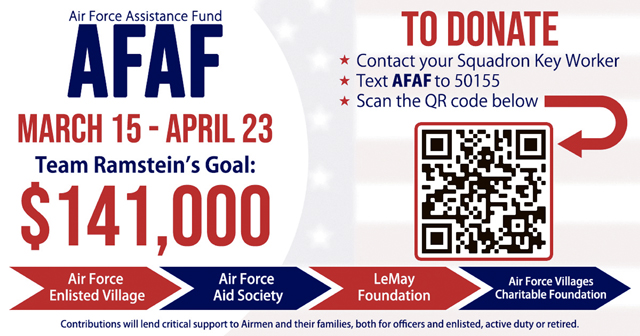 Airmen and Guardians may make donations by visiting the AFAF website and clicking the donate button. Members may contribute via e-check, debit or credit card. To donate with a paper check, a donation form is available on the site, which can be filled out, printed, and mailed in along with the check. If the donor is a retiree, a payroll deduction plan is also available.

D’Avanzo said key workers in every squadron will contact members eligible to give, but if you have not been contacted, reach out to your Airman & Family Readiness Center’s Air Force Aid Society Officer. They will also be able to get you in touch with the Installation Project Officer if you haven’t been contacted.

He added because the AFAF is a “for us, by us” campaign, key workers and unit project officers are limited to soliciting donations from uniformed Department of the Air Force and retired members; however, civilians and contractors who would like to donate may do so by cash or check where accepted, or by using the e-Giving platform.

Last year’s campaign raised $2.13 million toward the charities, even as the pandemic shutdowns were just starting the week after the campaign began. This year’s goal is to raise a collective $4.5 million.

“It’s difficult for our campaign workers to go desk-to-desk with so many members teleworking, and it’s just not safe to do so in this COVID environment,” he added. “We’re doing what we can this year by using e-Giving platforms and peer-to-peer fundraising so our campaign workers have more tools at their disposal and our contributors have more avenues to donate.”

The Air Force Aid Society helps active duty Airmen and Guardians in times of emergencies by providing loans and grants, and supports base enhancement programs.

The LeMay Foundation supports widows and widowers of Air Force retirees, both officer and enlisted, in the event of a financial need, by giving grants of assistance.

D’Avanzo said the team of charities is committed to helping Airmen, Guardians and their families, but can only do so with support to the campaigns.

“They are only able to continue providing assistance because our predecessors gave to the AFAF campaign for the past 47 years,” he said. “Now it’s our turn to pay it forward. Today we may be donating, but tomorrow we may be calling for assistance.”