Monday is St. Martin’s Day. Traditionally, children and parents will walk in lantern processions to honor St. Martin, the patron of the poor and friend of children. In Kaiserslautern, Ramstein, Landstuhl and other villages of the KMC, several parishes and kindergartens organize lantern processions prior to Monday where children carry lanterns, which they created in kindergarten or school, and sing Martin songs.

Usually the walk starts at a church and goes to a public square. A man on a horseback dressed like a Roman soldier and representing Saint Martin, accompanies the children. When they reach the square, they will begin the Martin’s play, the bonfire is lit and Martin’s pretzels are distributed.

In Kaiserslautern, a big lantern procession will start 6 p.m. Monday from St. Martin’s Church near St. Martinsplatz at the beginning of Steinstrasse and end in front of the Rathaus (city hall). Here St. Martin will divide his coat and the bonfire will be lit.

In other communities, kindergarten children will meet the days prior to Monday.

Martin of Tours was born in the year 316 or 317 as the son of a Roman civil servant. At age 15, he joined the Emperor’s cavalry.

One cold winter day, he was riding through country when a shivering beggar came his way asking for alms. Since Martin had neither food nor money, he cut his robe in half with his sword and gave a piece to the freezing man.

Supposedly, the following night Jesus appeared in Martin’s dream and explained how he had been the freezing beggar, who Martin had given half his robe to.

This event changed the soldier’s life. He left the army, got baptized and became a student of Hilarius of Poitiers. In 356, after Martin’s teacher was banned and he failed to convert his father and others to the teachings of Hilarius, he left for an island near Genua, where he lived as a hermit.

In 360, Martin gave up his solitary life to join Hilarius again who returned to Poitiers. In 361, he founded the first Gallic monastery in Liguge. In 371, the clergy and the people from Tours elected him for bishop. In 375, he established Marmoutier, a monastery for ascetic life and a school for bishops.

Martin kept trying to evangelize pagans. On Nov. 8, 397, during a pastoral trip to Candes, he died. Thousands of monks, consecrated virgins and others went to his funeral Nov. 11. 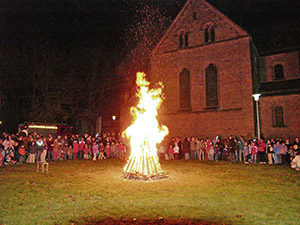 Years later, a basilica with the St. Martin Abbey was built on top of Martin’s gravesite. King Chlodwig elected Martin as patron of the Francs.

The tradition of the lanterns goes back to former times, when people lit candles to honor a saint and when lanterns were put up everywhere in town when a bishop came for a visit.

The custom of lighting a bonfire after the lantern procession represents the beginning of festivities. In former times, most of the work on the fields was completed and then it was time to celebrate, drink and eat. Traditionally, a fat goose and sweet bread were served.

Besides the traditional lantern processions, some other festivities honoring St. Martin are scheduled to take place. 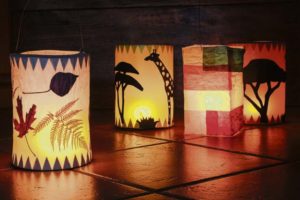 In the wine growing village of St. Martin, south of Neustadt, the Martinus wine fest is celebrated today through Sunday.

Dahn will hold its traditional Martini market with vendors and a little carnival Sunday. Shops will be open in the afternoon.