Christmas Celebrated Around the World 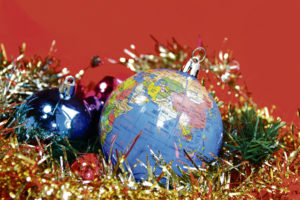 The month of December is a time for random traditions around the world. Whether your family plays board games or sings karaoke, most households in America share the common tree-food-gift combo in one form or another.

Though the Christmas Hollywood portrays might seem like a universally accepted norm, what you see in the movies isn’t what you’re going to find in Australia on Christmas Day.

Santa gives his reindeer a rest when he heads down under and uses “six white boomers” — also known as kangaroos — instead. In the hot summer sunshine, Christmas dinner routinely consists of shrimp on the barbecue and fresh seafood.

And what do roller skates have to do with Christmas? If you happen to be in Caracas, Venezuela, on Christmas morning, they’re considered the most efficient way to get to mass. Many neighborhoods close their streets to cars until 8 a.m., and loyal worshippers strap on their wheels and ride to church. Before bedtime the night before, children will tie a piece of string to their toe and dangle the long end out the window. The next morning, passing skaters give the string a tug so the children won’t miss the derby.

In some parts of former Yugoslavia, families have developed a great way to show brotherly love. As Christmas approaches, parents tie their children up until they promise to be good. The following Sunday, the children break that promise and tie up their mothers until she gives them treats and toys. Finally, it’s Dad’s turn, and he is bound until he relinquishes yet another set of gifts — usually the family Christmas presents (this is the only country that openly admits to tying up their young during the holidays.)

It’s best not to mention the figurine of the pooping peasant that you can find hidden somewhere in most Spanish homes during the holidays. Don’t give him away as a gift, but if you come across him in someone’s house, you’re considered lucky.

And in America, it’s all about entertainment. In 2012, Fandango broke a box office record with best-ever, single-day ticket sales on Christmas Day. Holiday entertainment is important to Americans. From TBS’s “A Christmas Story” marathon to the holiday prime time classics with Frosty and Rudolph, it’s no surprise that much of American tradition is wrapped up in entertainment.

And watch out or you just might find yourself on Dec. 24 parked in front of a television in a last minute gift-wrapping frenzy, reliving the classic tale of George Bailey and Clarence in “It’s A Wonderful Life.”

Not a bad way to wind down at the end of crazy holiday season.

The joys of St. Nicholas Day in Germany

If you wake up the morning of Dec. 6 to find a full bag of candy or presents waiting for...