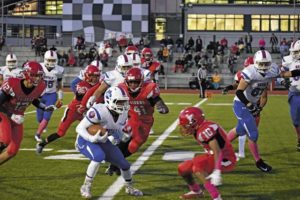 It was about as American pastoral as one could get. Friday night football under the lights, homecoming, crosstown rivals, full moon, the perfect scenario for a Hollywood movie. But the spoiler? More than 20 penalties, some coming at crucial times, negating touchdowns and spectacular runs. Instead of calling “Cut!” the director would have called “Flag on the Play!” After each play, the fans scanned the field and murmured, “is there a flag?” Despite the distractions, it was Ramstein who once again broke Kaiserslautern’s heart 23-14.

Kaiserslautern’s first period was bittersweet. Following an early interception, senior Tre Dotson scampered around right end for a 7-0 lead. It also lost a major cog in the wheel when senior Darius Camp went down and was essentially out for the remainder, forcing an alteration to the game plan.

Ramstein blazer Dominique Arizpe, pictured above, earned the Royals first score when he took a handoff from Carl Norman, waited for his blocking to come together, juked at the line, and, once the afterburners kicked in, no one was going to catch him.

“I got the handoff and was patient,” Arizpe said. “I got some great blocks from Chris [May], Logan [Ridenbaugh] and Teddy Ward and the hole opened and I was able to run it in.”

J.J. Little made it 14-7 with a short run before Kaiserslautern’s Nick Henry tied it on a 65 yard crossing pattern catch and run. Ramstein’s Bryce Thomas scored from 20 yards to make it 20-14 at the half, and outstanding kicker Matthew Reismann booted a late field goal for some insurance.

Running back Gabe Davis was a battering ram and wore down the Raiders, churned out tough yards and ground out the clock, setting up Reismann’s late field goal.

Ramstein Head Coach Carter Hollenbeck closed the night with a near perfect address to his tired but excited players, putting it all into perspective. He asked them just three things: “Did you work hard? Did you have fun? Did you respect the game?” To all three, the players gave him a resounding “YES.”  Success, regardless of the score.

In Division III, Baumholder and Alconbury hooked up in a track meet with Alconbury outsprinting the Buccaneers 76-54. Braden Jewell threw for 220 yards and three touchdowns. Baumholder, 2-2, is at undefeated Spangdahlem this weekend.