Kaiserslautern put a definite ex­cla­mation point on its tune up victory at the same Baumholder course on which it will run tomorrow’s cross country European Championships. The Raiders swept the top five places in both the boys and girls competition giving notice to rivals Stuttgart and Ramstein that they will be right there with them. 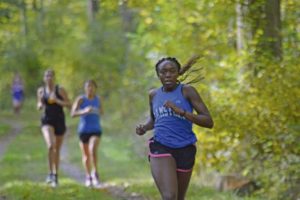 As expected, Griffen Parsells, who has the top time in Europe this fall, won the boys race to remain undefeated and truly untested. He was followed by teammates (left to right below) Brandon Seyler (fifth place) Robert DeWitt (fourth), Ethan Cooper (second) and Reece Harding (third).

At Seewoog, Stuttgart’s depth was too much for Ramstein to overcome as the Panthers beat the boys 19 to 44 and the girls 20 to 43 in their quadrangular. The Royals’ Conner Mackie was second in the boys, Ben Brewster eighth and Gideon Zaugg tenth. 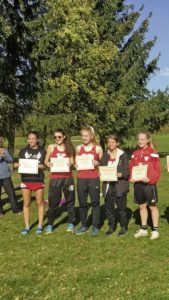 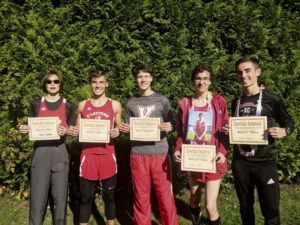 “From what we saw today, it is going to be a tough race against Stuttgart,” said Coach Blake Peterson, referring to the European championships. “This week we weren’t quite ready for the race but I think everybody tried their best. We are going to have to get mentally ready for Euros. Physically we have done everything we can do.”