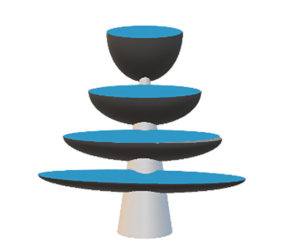 Imagine for a moment a four-tiered fountain. The bottom basin is broad, but shallow, and each next higher level of the fountain gets progressively narrower, but deeper, until the narrowest and deepest tier at the top of the fountain.

Representing stages of spiritual maturity, each next tier up the fountain represents a thorough reappraisal of values and a transformational shift of perspective.

In this paradigm, the least effective leader at the lowest tier emphasizes the value of material objects. Not altogether wrong, this leader sees their position as a caretaker of things. A leader at this tier sees their job as a steward of assets; optimizing investments and mitigating losses. Whatever else is true, a person who does not take this responsibility seriously would be quickly dismissed. Frivolity and waste are hardly the qualities of maturity, but neither is an exaggerated valuation of things. Objects, after all, are meant to be used.

The second tier up the leadership fountain prioritizes actions over things.

“A ship in the harbor is safe, but that is not what ships are made for,” wrote John A Shedd in “Salt from my Attic.”

Bracketing the power of symbols for a moment, the value of objects is in their usefulness and the mature leader recognizes that using a thing risks the investment. Planes are meant to fly, infrastructure is meant to be occupied and funding is meant to be spent. Risk is to be managed rather than avoided because not using a thing to protect it is the biggest waste of all. A baseline grasp of this tier is fundamental to leadership; a person afraid to risk objects is not the leader, whether or not they are in charge.

Leaders at the third tier of spiritual maturity recognize that humans are categorically more valuable than the activities and objects of the lower tiers, which is reflected in the depth of the basin. Leaders who articulate this hierarchical val-uation of people, activities, and things are off to a great start, but true maturity manifests itself in daily interactions, impromptu situations and unforeseen circumstances. Taskers, deadlines and regulations are part and parcel of leadership roles, but cutting team members down for the attainment of a thing or haranguing them for a failed action following innovative protocols gets noticed. Followers are incredibly perceptive — especially when it becomes the rule instead of the exception.

The fourth tier and true source of the fountain is yet higher than humans. Teeming with spiritual energy, this basin is where leaders engage with their deepest principles. The Air Force values of integrity, service, and excellence in all we do exist here as do personal values. For theists, this dialogue is prayer. Leaders operating at this level live in conversation with the fountain’s source and it is here that their relationships, activities and objects find renewal.

Borrowing from Simon Sinek’s paradigm in “Start with Why” this top basin represents the ‘why’ of the organization. Flattening the fountain model and adding a circle makes the adaptation more clear.

Engaging the ‘why,’ a leader appreciates that “the main thing is to keep the main thing the main thing.” At the heart of every organization are the values that enliven it — the inviolable things to which leaders hold themselves and their collaborators accountable. In effecting and articulating these values, the leader fosters the communal narrative. The more compelling the story, the more energy that spills over to the ‘who’—real people with impressive competencies and realistic limitations. Bringing the ‘why’ into dialogue with the ‘who’, the team formulates the ‘how.’ A sensitivity to ‘how’ is foundational to leadership — motivating people to contribute earnestly to a particular goal. Finally, the ‘what:’ this is where performance metrics capture how much water is making it to the lowest level. Though the easiest to quantify, the levers that influence it are not always obvious.

Returning to the fountain paradigm, perhaps the clearest expression of flowing water is the domain of constructive feedback. Bringing people into dialogue with the ‘why,’ leaders help teammates contribute to the very heart of the organization.

Done well, feedback emphasizes the value of people above their usefulness and personalizes overarching principles. Done poorly (or not at all), the tax that organizations pay for spiritual immaturity is high — surfacing first in unit culture as a reticence to contribute and eventually in mission execution. The differences can be striking: whereas less mature leaders grumble when the lower and shallower basins dry up, spiritually mature leaders focus on the water’s source to replenish their organizations.

To be sure, trying times reveal the mature among us for it is precisely on such occasions that spiritual women and men embolden their collaborators to surpass them. This is leadership in its finest moments — investing in the next generation and pushing them to new heights of character.