E-scooters in Germany — dos and don’ts 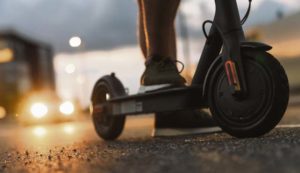 E-Scooters were finally authorized for use on German roads almost exactly two years ago and they were quickly adopted as the perfect mode of transportation for short distances. These electric pedal scooters are usually small and easy to transport, often even foldable. The perfect vehicle for inner cities and short distance commutes.

These “Small Electric Vehicles,” as they are called in official bureaucratic German, are regulated in a 50-page ordinance by the Federal Ministry of Transport. The most important rules for riding an e-scooter on a German road are:

In some German cities, the popular vehicles have now become quite the nuisance. “How many scooters may be on the bottom of the Pegnitz?” Asks city councilor for the Grüne in Nürnberg, Mike Bock, recently. A German newspaper reported that the city of Köln initiated recovery of about 500 e-scooters from the bottom of the Rhine River.

U.S. Army Soldiers have also discovered the convenient e-scooters for day-to-day rides across installations and for daily commuting. At Storck Barracks in Illesheim, Regionally Aligned Forces (RAF) Soldiers on deployment status are not allowed to purchase cars. Many Soldiers use the e-scooters to ride from their living quarters in the housing areas to their workplace in the hangars, to the dining facility, and to the fitness center. They increasingly use their e-scooters to ride to the nearby town of Bad Windsheim for shopping and take it on the train as they venture out on day trips to nearby cities.

Steve Borkowski, installation site manager for Storck Barracks, is concerned: “The Soldiers buy these e-scooters off the internet without any knowledge about the legality here in Germany. They are just fun to ride and they have become fairly inexpensive to purchase. I have also seen electric hover boards and alike on post, which are not legal to ride in Germany.”

When asked about the legal implications, USAG Ansbach Deputy Director of Emergency Services, Peter Kleen explained: “The e-scooters are so new, there is no USAREUR guideline on the operation of e-scooters on post. Generally, the Deutsche Strassenverkehrsordnung, the German traffic regulation, is applicable on all U.S. Army installations in Germany.”