For centuries, Heidelberg Castle has stood strong and now rests on a hill 300 feet above the Neckar River Valley and the “Altstadt,” or old town. Being one of the most advanced castles during its time, it was known for its vibrant mirrors and glass, and even though it had no running water, it had running wine.

After the Thirty Years War, the castle’s time almost came to an end when it was abandoned and then burned in flames after being struck by lightning. 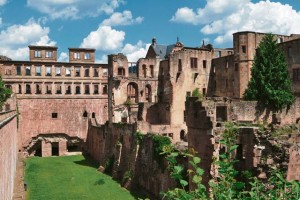 Despite the disasters, Heidelberg’s natural beauty still inspired famous poets and writers from around the world, and that’s what made it so famous. Subsequently, Heidelberg was noticed by a French nobleman, who is known for “saving” the castle and helping with its reconstruction in the 19th century. Today, the romantic castle still holds the key to Heidelberg’s heart and remains the city’s most cherished attraction.

Among the 70 castles and palaces along Castle Road, Heidelberg Castle is one of the most visited with 1 million visitors each year, including tourists and locals.

Birte Mardeck, manager of all guided tours for Heidelberg, Mannheim and Schwetzingen castles, said Heidelberg Castle is worth seeing.

“It (is) very beautiful,” Mardeck said. “It’s very ideal with this bridge and the river and then the old city and the valley, and above you have this huge castle, and I think it’s really something special.”

There are tours available for groups and individuals and a special night watchman’s tours for families where guides dressed in historical costumes take you on a tour of the castle at night.  This year, they have a new tour called “The Marriage,” guided by “Frederick V” or the “Winter King” and “a nice-looking Elizabeth,” Mardeck said. This new tour celebrates Fredericks marriage, that took place on Valentine’s Day exactly 400 years ago.

A general guided tour will walk you through the castle’s interior and courtyard where you can really delve into the castle’s history. From the courtyard, you will see the Fredrick building, the only part of the castle totally reconstructed, the Henry building with a well-thought-out arrangement of statues of figures from the Old Testament, and the European and German pharmacy museum. Walking up the winding stairs inside the castle is worth the climb. Reaching the top, you will witness a beautiful 19th century, sophisticated style with fortresses and gold ceilings.

After the tour, take a leisurely walk to the castle’s wine barrel, which holds 55,345 gallons of wine, making it the largest wine barrel in the world. And don’t forget to try a glass of “rot” (red) wine, which is almost identical to what the residents of Heidelberg Castle drank (the only difference is that now it is 11 percent alcohol rather than 7.5 percent). Also, walk up the stairs leading over and around the barrel that’s 9 yards long and 8 yards high.

A small walkway leading to the outside of the original palace walls gives you a picturesque view of what was once the artillery gardens and is now part of the castle gardens. Here, you will see the preparation of Heidelberg Castle’s big summer festival. This year’s festival takes place until Aug. 4.
Another popular event taking place three times every summer are the Castle Illuminations (the next illumination on July 13).

During the event, the castle is illuminated in red, signifying the burning of the castle after it was hit by lighting, and fireworks are set off from the old bridge. This year, two more special illuminations will be held to celebrate Frederick and Elizabeth’s marriage.

For more information on tours and events, visit www.heidelberg-marketing.de.