Many Easter traditions, such as the Easter bunny, egg hunts and chocolate or candy bunnies, are quite similar in the U.S. and in Germany, however, there may be a few customs you are not familiar with. 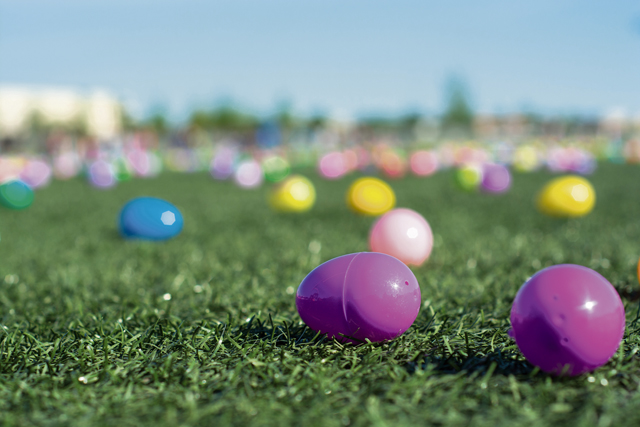 In Germany, Easter is historically a Christian holiday with church services on Friday, Sunday and Monday. Both Good Friday (April 15) and Easter Monday (April 18) are public holidays in Germany and all stores, banks and official offices are closed. Switzerland and the Netherlands are closed on Friday, while Luxembourg, France and Belgium treat Easter Monday as a public holiday.

Not only does Easter mark the end of Lent, it also sweeps you into the spring feeling with a number of German customs to go along with it. As elsewhere in the world, children enjoy blowing out eggs, colorfully dying them and are eager to hunt for the ones the Easter bunny has hidden for them.

Beginning the weekend of celebration on Thursday, referred to as “Gründonnerstag” (green Thursday) by Germans, may not be so familiar. Tradition has it that some families only eat pure vegetarian meals, preferably in green. Popular dishes include spinach with potatoes and fried eggs, potatoes with green herb sauce, a specialty from Frankfurt, or egg salad with mustard and herb dressing.

In honor of St. Peter, who was a fisherman, fish is typically served, fried or steamed, on Friday. Salmon with potatoes and green asparagus is popular, while kids may prefer simple fish sticks. An Easter Sunday dish could be “falscher Hase” (false rabbit), a type of meatloaf, or the traditional Easter lamb, served with rosemary potatoes and fresh spring vegetables. Typical desserts include carrot cake, a braid shaped cake called “Osterzopf” or cakes and cupcakes with fresh fruits and cream. Chocolate Easter bunnies, eggs, chicks and other sweets remain the all-time favorites for younger (and older) children.

Easter bonfires are lit in some villages, which traditionally served to drive winter spirits away. In some parts of Germany it is common to burn rotten wood and old furniture, no longer needed clothes and shoes, and even rags in the “Lumpenfeuer” (rag bonfire), so as to clear the house of unnecessary items, an early form of spring cleaning.

A popular sport during the season is “Ostereierschiessen” (Easter egg shooting). Contestants shoot at paper goals marked with Easter figures or eggs with the aim of hitting as many “eggs” as possible. Each successful shot brings about a real egg and the winner of a whole tournament is crowned as the “Schützenkönig” (champion marksman).

You may find colorfully decorated flower bouquets or even wreaths with bright spring flowers such as crocus, primroses, tulips, daffodils and Easter ornaments in households and stores. Others decorate pussy willow or forsythia branches with small wooden eggs, bunnies or lambs or tidy up their front yards by hanging ornaments on bushes. Some communities even offer colorful and elaborate Easter trees in traffic circles or on market squares.

A somewhat older tradition is to pull moss from below trees and shrubs and bind it into natural Easter baskets for the bunny to fill with eggs and small gifts. Self-made willow baskets are also popular and younger families might plant wheat seeds into a glass bowl or vase about three weeks prior to the holiday for children to watch the Easter nest grow.

Along the coastal regions of the North and Baltic Seas, the Easter bunny likes to hop around the beach, lay eggs in the sand and children can dig for the precious “seafood” with buckets and shovels.

Have you ever wondered why bunnies, rather than hens, deliver the eggs?

Rabbits have historically been seen as a symbol of fertility (offspring can be up to 20 bunnies). In addition, in Byzantium a rabbit was an early symbol for Christ. Both in Greek and Germanic mythology, rabbits were considered to be holy animals for Greek Goddess Aphrodite and for Germanic Spring and Fertility Goddess Ostera.

According to legend, children were sent to meadows to search for eggs in Zürich, Switzerland, and since they more often saw rabbits than hens, they believed that the long-eared animals had left the eggs. In Germany, the rabbit first became popular in 1678 (Reformation time) by Protestant families and the bunny finally became a “star” thanks to the chocolate industry.

The Easter season can offer a lot of fun and some communities hold Spring or Easter Markets around the holiday. Check and see what is going on in your area: https://www.ostereiermarkt.de/rheinland-pfalz/