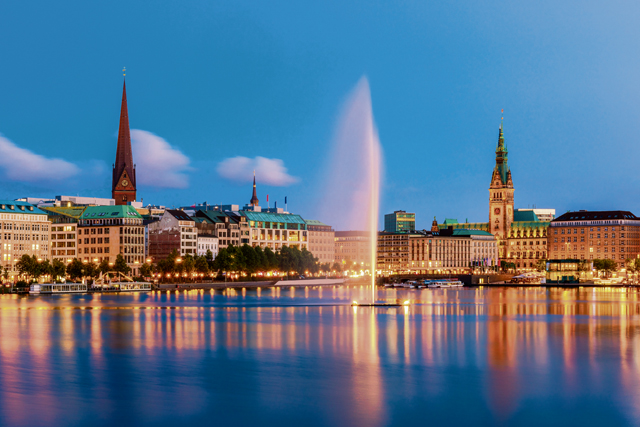 Looking for a weekend away? Head up north and lose your heart to Hamburg! This wonderful harbor city makes for a great visit any time of the year and has a lot to offer whether you want a romantic getaway, a family break or a lively party weekend with your friends.

Port of Hamburg – Gateway to the World

The Port of Hamburg is situated in the Elbe River basin, only about 100km from the open sea. Thousands of ships from all over the world call at Europe’s second largest port. From the cruise ship terminal to the historic Speicherstadt and the jetties to the modern container port – it’s a fascinating, thriving area of industry around which the entire city of Hamburg has been built.

It’s possible to take tours of the port by bus, but by far the best way to view it is from the water — on a boat. There are numerous tour companies that offer harbour tours through the port, passing right by huge container ships, shipyards and container terminals.

The port also hosts numerous museum ships offering tourists a unique way to learn more about the city’s shipping history. Converted from former passenger liners or barges, each tells a unique story about the history of the city as a shipping and trading post.

In the Museumshafen Oevelgönne, you can visit around 20 vintage ships, including the German and Dutch flat-bottomed vessels, steam tugs and barges. There is also a steam crane, a high-seas cutter, as well as a harbour ferry that has been converted into a café. The star of the harbour is the former lightship Elbe 3. The ships have not only been painstakingly restored but also still sail on occasion as well.

The cargo ship Cap San Diego was built in 1961 and it has been permanently anchored as a museum ship at the Überseebrücke in the Hanseatic city since 1986. The elegant silhouette of this ship, which is still seaworthy, has now become a part of Hamburg’s harbour promenade as much as the Speicherstadt and the HafenCity.

Every Sunday from 5-9:30 a.m. the legendary Hamburg Fish Market takes place (7 a.m. from mid-November to mid-March). It’s essentially a giant flea market with lots of stalls selling fresh fish, fried fish and pickled fish, too — all ready to eat or to take home and cook yourself.

Pretty much everything that is not bolted down is traded here, as it has been since 1703. From the kilos of fish at a bargain price, dusty porcelain jugs or a chirpy family of ducks. Either get up early, or hit the Reeper Bahn the night before and stay up late – Fish Brötchen (fish rolls) is officially the breakfast of party animals in Hamburg!

The 160-hectare Alster Lake in the heart of the city is a true paradise for sailors, rowers and paddlers, but surprisingly has a depth of no more than 2.50 meters.

Its opulent grasslands on the edge of the bank offer plenty of opportunities to be close to the water, right in the middle of the city. Just kicking back on a blanket or a deckchair, jogging “all the way round the Alster,” taking a walk, playing frisbee and boules – the options are endless for you to enjoy this splendid green oasis on land. During some winters, you will even be able to make your way across the lake to the other bank without getting your feet wet. Naturally, the Alster is surrounded by cafés and restaurants where you can enjoy a meal or drink with a splendid view of the water.

In the southern part of this area discover the Kennedy Bridge and the Lombard Bridge which separate the larger Outer Alster from the Inner Alster — the latter gives the city center a romantic and maritime air. This is where the Alster steamers take off from Jungfernstieg — a bustling and modern promenade. These steamers run regular services connecting various quays on the Outer Alster. So if you would rather not go out on the lake in a rented paddle boat, canoe or sailing dinghy: Take a tour on the Alster steamer and experience the landscape as well as the silhouette of the city from the water! 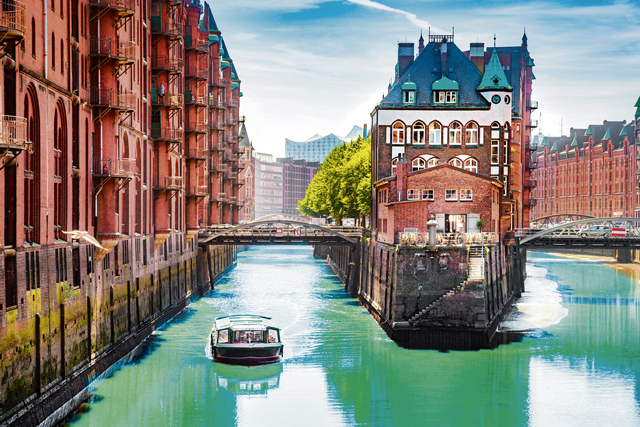 Hamburg Town Hall was built from 1886 to 1897 and with its impressive architecture dominates the centre of the city. The magnificent sandstone building houses the city’s senate and parliament, which meets every second Tuesday. It’s an impressive building which is well worth a tour, though it must be arranged in advance.

In stark contrast to the restrained Hanseatic style, the Town Hall has an elaborately decorated façade, flanked by a total of 20 statues of emperors. The Kaisersaal (imperial hall) – named because of the visit by Kaiser Wilhelm II at the opening of the North Sea-Baltic Canal – has a striking ceiling painting that symbolises merchant shipping under the German flag. In the Senate chamber, light passes through the large glass roof: This symbolises the ancient Germanic custom that the council should meet in open air. The Grand Ballroom is 46 meters long, 18 meters wide and 15 meters high. Five huge paintings depict the history of Hamburg from 800 to 1900 and 62 city coats of arms of the old Hanseatic League decorate the walls. The three chandeliers with 278 lights each weigh 1,500 kilograms!

Visit the largest model railway system in the world at Miniatur Wunderland. Discover over 930 trains with nearly 14,450 railway wagons, 228,000 trees, 215,000 figures, 8,850 cars, 13,000 meters of track, and 3,660 buildings and bridges. This intricate and realistic miniature world is perfect for a day out with the kids. It is set over eight sections:

Central Germany and The Harz, with its seemingly endless ICE high-speed route and over 130 trains, it includes beautiful landscapes and replicas of famous Hamburg districts and attractions such as St. Michaelis Church and Hagenbeck Zoo and the Port of Hamburg.

Knuffingen is such a famous ‘mini’ city that it even has its own website (in German)! It is home to 10,000 ‘model’ inhabitants and its local police force frequently catches speeding drivers using their radar trap. The local fire station is kept pretty busy too.

America draws ‘tiny’ crowds with its desert metropolis and paradise for gamblers, Las Vegas: More than 10 percent of all Wunderland lights — around 33,000 — are installed here. You can also enjoy mini versions of the Keys and Cape Canaveral as well as of course the Grand Canyon, Mount Rushmore and Yosemite Park.

Scandinavia was set up as the sixth section in 2005. Particularly impressive is the real water basin in which there are currently 16 ships that travel from miniature port to port.

Switzerland opened in November 2007. Here the mountains stand with the 6-metre high Matterhorn as the centerpiece where visitors can hike and enjoy the view once they have reached the summit. There are many astounding highlights, such as the tiny chocolate factory which produces real chocolate, or the open-air concert with 21,000 tiny visitors.

Knuffingen Airport is the latest addition to the attraction, which took 6 years of construction! It offers visitors over 100 aeroplanes and other vehicles with fully automated movements.

Hamburg has many large churches, but none like St. Michaelis Church – there is only one “Michel.” This famous city landmark is over 350 years old and has been completely destroyed and rebuilt three times between 1641 and 1912.

Experience the fabulous view of Hamburg, the port and the surrounding countryside from its platform 132 meters high – there is a lift if you don’t want to attempt the stairs, which is quite a workout. After dark, the panorama of the Hanseatic city from this viewpoint are breathtaking.

The journey time to Hamburg is around 4.5 hours drive from Frankfurt, 5.5hours from KMC and 6 hours from Stuttgart. The train is quicker by an hour from Frankfurt and Stuttgart (it’s about the same as the drive time from Kaiserslautern) and there are some great all-inclusive offers that include train, hotel, meals and in some cases tickets to musicals from the Hamburg Tourist Office, which are well worth checking out. See www.deutschebahn.com for cheap trains.

Due to regulations to prevent the spread of COVID-19, bookings and trips may be cancelled or postponed, and travel to neighboring countries may not be allowed. Please verify the status before making plans to attend.