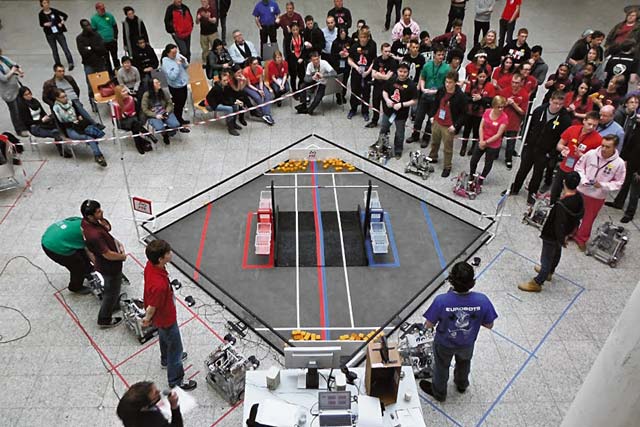 The competition involved designing and building a robot that could place blocks into baskets, raise a flag, hang from a pull-up bar, and locate an infrared beacon.

To prepare for the event, students met during their lunches and once a month on a Saturday to build their robots. Mentors from Lockheed Martin also donated their time and expertise to help students learn programming and design strategies, and parents held a bake sale at the Kaiserslautern Military Community Center to help raise funds for travel and parts.

Fifteen teams participated in the event, where Kaiserslautern students met other students from Aviano, Vilsek, Lakenheath, Romania, Germany, Italy, and the Netherlands.

There were three qualifying rounds. In Round 1, the Kaiserslautern robot displayed remarkable maneuverability due to the Omni-Wheel configuration of the steering controls. A last minute addition of a crank allowed the robot to raise the flag while their partner went for the pull-up bar.

During Round 2, the robot wowed the crowd by launching a block off its conveyor belt and into the basket.

After three qualifying rounds, the Block Busters landed in fifth place. Only the first four teams were automatically entered into the last two matches; however, the Block Busters placed well enough to be invited by the Eurobots to be their alliance partners in those semifinal rounds. In the end, the alliance team of the RoboRaptors and Falconators won the day.

The Block Busters received a tremendous amount of help along the way from mentors, parents, the administration and other FTC teams.

Even though this event is over, the team is still looking for ways to design robots. Some students will continue working with this robot to refine the design and test new ideas. Other students will be participating in the World Robot Olympiad this spring. This new contest features new challenges, requiring new robots and new programs.

If you have an interest in robotics and would like to take part in mentoring students, contact Chris Putnam christopher.putnam@eu.dodea.edu.