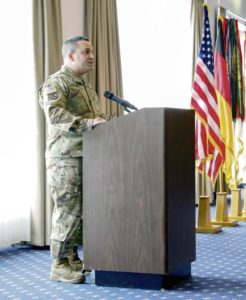 Maj. Gen. Steven A. Shapiro, 21st Theater Sustainment Command commanding general, opens the third annual Law Day Lunch May 10 at the Ramstein Air Base Officers Club with remarks about what it means to have the opportunity for German lawyers and U.S. military lawyers to collaborate.  The Law Day Lunch is an annual event held to build partnerships between German lawyers and U.S. military lawyers and to discuss how one another can better assist in the event a situation requires legal aid. 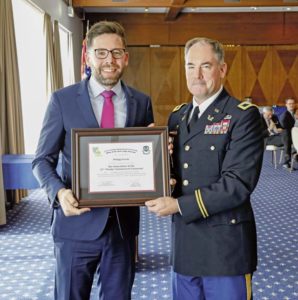 Col. John S. Frost (right), Staff Judge Advocate 21st Theater Sustainment Command, presents Philipp Fernis, German Undersecretary of the Ministry of Justice, Mainz, with a certificate for his honorary induction into the 21st Theater Sustainment Command Bar Association during an annual Law Day Lunch May 10 at Ramstein Air Base Officers Club.  Fernis is the third honorary member to be inducted into the 21st TSC  Bar Association and has been the guest speaker every year since the start of the Law Day Lunch.