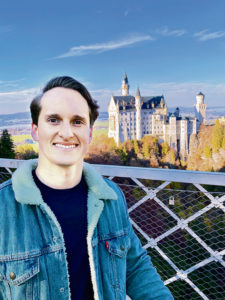 “A question I’ve often thought about — what does being a part of another culture look and feel like?

For me, learning German started when the U.S. Air Force Academy chose what language I would take for one year: German. I fell in love with learning a language, and here I am more than five years later. I have spent about half of my adult life in Germany, studied in Germany, and have wonderful German friends who will be in my life forever.

This hollow grief left me with many questions. How could I live every day as if tomorrow were my last? How do I figure out what to live for, what really matters? If it all ends abruptly, am I the person I have always wanted to be? Instead of being stressed, trying to squeeze everything out of my last moments, how could I be at peace knowing I have lived a fulfilling life? How could I make the journey fulfilling instead of working my whole life to be fulfilled? I did not want to realize in the end that with the only chance I had, I did not live a fulfilling life, and it is too late to change. I did not want to continue looking over my shoulder, searching for the grim reaper, scared of when we would meet.

At the time of my friend’s passing, I was in my second semester of German class, and it became a way for me to search for these answers. German facilitated a new perspective for me about human nature and the world. I then made it my goal to find programs where I could travel to Germany. I did not know what I was going to find in Germany. Still, I knew being immersed in another culture, and speaking another language would help me better understand life, push me mentally, and I might be able to learn more about why we are all here.

Along the journey, I reflected for countless hours, searching the world and my head for answers. After all this time of searching, I finally feel free. I am no longer scared, and I live a truly wonderful and fulfilling existence. Once I figured out what the questions and answers were and how to live for those answers, I had to figure out WHY they worked. I eventually had the breakthrough of my life, and I could not be more excited to share what I learned with the world in my upcoming book. Throughout the journey, I lost others around me. As a result, I saw the people I loved suffering and scared. I set out on the most challenging journey yet — trying to write everything I found into a book about the mindsets and perspectives to living an enjoyable and fulfilling existence and why those things lead to fulfillment. It is my first significant attempt at trying to make the world a better place — a question I will ask myself at the end looking back if I have the opportunity.

In 2018, I graduated from USAFA with a Bachelor of Science in Economics and a minor in German and was selected as a German Language Enabled Airman Program scholar. I commissioned as a 14N, Intel Officer, and last year was chosen to be the deputy of the United States Liaison Team – Romania (USLT-R). While at USLT-R, we helped strengthen the United States’ relationship with a critical NATO partner and was awarded Joint Service Achievement Medals.

As a German LEAP scholar, I was sent to a Munich Power Immersion Language Intensive Training Event, where I lived with a German family who were also my tutors. The power immersion helped me tremendously, and after returning from my LITE, I took the Defense Language Proficiency Test and scored a 3/3 for the first time, and I could not be more excited. I have been shooting for that level of proficiency since I began this language journey! I thank LEAP for allowing me to get better.

On my Power Immersion LITE, my brain became predisposed to thinking in German. I would wake up, and my internal voice was in German: walking down the street, going to the gym, surfing or skateboarding. Everything seemed to make more sense: the city, the people, and the ebb and flow. I understood the culture, but now, I was at a place in the language to be in society and to blend in. There were no looks when I started talking, and I could understand all the conversations around me.

I never had a specific goal in learning German. I wanted to be more proficient, of course, but now I have felt that invisibility would have been the goal. German has brought me the feeling of being accepted in another culture, opened my eyes to humanity, and helped me gain incredible perspective in my quest to figure out what we are all doing here on Earth.

So, I just wanted to say — thank you to USAFA for allowing me to visit and study in Germany many times and thank you to LEAP for continuing to facilitate my endeavors in German. Thank you to everyone who has helped me along in my journey. The German language has led to wonderful friendships and experiences that I will never forget and helped me find answers in this long journey. Studying German has truly changed my life.”