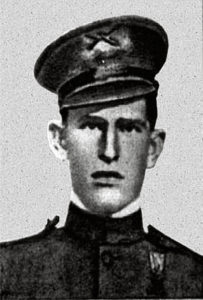 Army Pvt. David B. Barkeley likely didn’t know that World War I would end just two days after he volunteered for a treacherous mission. What he did know was that his unit needed reconnaissance that he could provide, so he didn’t hesitate. He lost his life during that mission, but the bravery he showed earned him the Medal of Honor.

Barkeley was born March 31, 1899, in Laredo, Texas, to parents Josef and Antonia. The family moved to San Antonio in 1904 after his sister, Amelia, was born.

According to the Texas State Cemetery website, Barkeley’s dad, who had once been a soldier, abandoned the family when he was young. This forced Barkeley to drop out of school at age 13 to find jobs to support his mother and sister.

Barkeley’s mother was the daughter of Mexican immigrants, so for much of his life he went by Barkeley-Cantu — which represented his father’s surname and his mother’s maiden name. But he changed it to just Barkeley when he joined the Texas National Guard in 1917.

The U.S. had joined World War I, and Barkeley wanted to fight on the front. However, he knew he couldn’t if the Army was aware of his Hispanic heritage. At that time, Army policy relegated non-white soldiers to noncombat support battalions. So, Barkeley kept his heritage quiet. He even instructed his mom to not use her surname in letters for fear they would find out and move him out of a combat role.

Barkeley was placed with Company A of the 356th Infantry, 89th Division, and sent to Europe with the American Expeditionary Forces in August of 1918.

On Nov. 9, 1918, Barkeley’s unit was stuck along the banks of the Meuse River near Pouilly, France. Across the river, a well-fortified German Army was bombarding them with artillery, as well as machine gun fire and bombs from airplanes.

To break through the lines, they needed to find out the enemy’s exact position, the depth of the river and where American troops could cross easiest to strike. To do that, someone would need to cross the frigid river to do reconnaissance.

Barkeley, who was known as a strong swimmer as a child, immediately volunteered, even though the mission was treacherous and the chance of survival was slim.

He and another volunteer soldier, Army Private 1st Class Harold Johnson, prepared themselves as best they could before climbing into the icy river. Despite the cold and the threat of enemy patrol boats and gunfire, the pair made it across the Meuse. While on the opposite bank, they gleaned what they could about the enemy’s position, then headed back across the river.

Johnson completed the trek but just barely. He had to be pulled from the water after nearly freezing to death. Unfortunately, Barkeley didn’t survive. Before he could make it back to the American side of the river, he was seized by cramps and drowned. He was 19.

Two days later, the armistice went into effect and World War I was over.

Neither man’s effort was in vain, though. Barkeley’s family received notice in early February 1919 that he had earned the Medal of Honor. It was presented to Barkeley’s mother during a ceremony in San Antonio on Feb. 17, 1919. Johnson also received the high honor for his effort in crossing the Meuse.

Barkeley was initially buried in France, but his remains were returned to the U.S. in 1921. He became the second person to lie in state at the Alamo — the first was Army Maj. Gen. Frederick Funston, who earned the Medal of Honor during the Philippine Insurrection — before being buried at San Antonio National Cemetery.

Barkeley’s state made sure to remember him and his sacrifice. In 1921, a San Antonio elementary school was named after him. Twenty years later, as the U.S. military began to prepare for its inevitable entry into World War II, Camp Barkeley near Wichita Falls, Texas, was named in his honor.