The Brenner family performed a High Altitude Balloon launch on Jan. 10 atop the hills of Winnweiler, Germany. Despite freezing temperatures, limited on-site support, and one very complicated configuration, this local family of four successfully launched three pods into near space.

The Raider III mission is part of KHS’ National Technical Honor Society after-school program. This third mission was the most comprehensive to date. Six complex science experiments were placed amongst the three pods. The majority of these experiments were designed to support the students’ Junior Science and Humanities Symposium research. The launch plan, payload, and experiments were the culmination of hours of research and planning by the entire NTHS team. 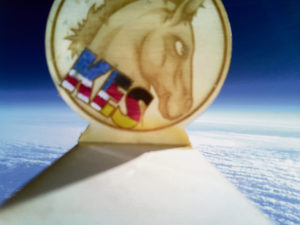 For the crew of NTHS, this was the first mission to include live specimens. The team placed a cuvette of live algae within a colorimeter to assess the effects of radiation in near space. Additionally, a celery stalk partially submerged in food color dye was photographed throughout the flight to determine its capillary effect in microgravity. Other science experiments of interest included gravity’s effects on sound, light and weight.

Raider III offered plenty of additional capabilities due to the newly incorporated triple-pod configuration. The team used this extra space to include a total of eight cameras, six Raspberry Pi computers, and four tracking systems (APRS, Spot Trace, GPS, Beacon). Attached outside of the camera pod were organizational emblems of the team’s sponsors (AFA Chapter 507 and AFCEA Chapter 158), plus Raider III partners Kaiserslautern Elementary School. It was through KES that many of the experiment ideas originated.

The Project Horizon crew, consisting of NTHS members, remotely monitored the entire flight and were able to support the ground crew as they tracked the vessel 130 kilometers from the launch site. Although the virtual Command and Control Center had close coordinates on the payload, it was an anonymous call from a local resident who provided final GPS coordinates as they had spotted the parachute and pods quickly descending into the nearby forest area. Each of the three pods contained contact information should the pods be found.

The biggest challenge for ground crews involved retrieving the pods. Unfortunately for the ground crew, only one of the pods could be retrieved on launch day. The remaining two were nestled in tree branches sitting 13 meters high. Ground crews would return one week later with a 12 meter telescopic pole and were able to retrieve the remaining two pods.

School closures, social distancing and stringent COVID-19 restrictions were unable to prevent the Project Horizon team from completing their mission. With a little help from Mother Nature providing clear skies, the NTHS Project Horizon team was able to obtain experimental data crucial for their impending JSHS submission just days away.