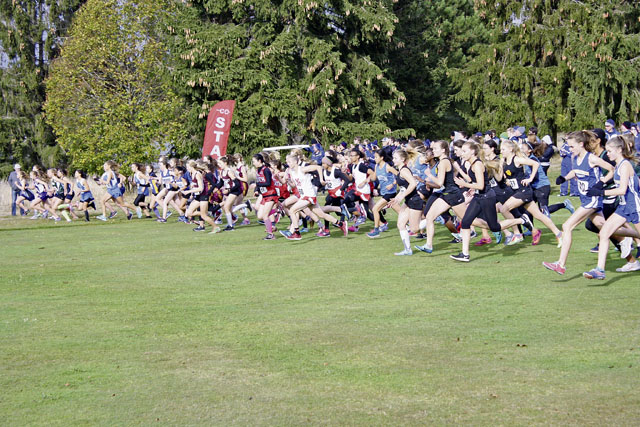 Dashiell Rogers won the boys’ cross country Europeans meet and fueled his Ramstein Royals squad to an overall Division I team title. Finishing up his senior season in high style, Rogers pushed hard early and blew past the competition late in the race with a Rolling Hills course-record 16:16.68 and eclipsed second place runner Mac Roberts of Black Forest by about 40 seconds.

Ramstein had Denver Dalpais finishing in seventh place and four others high enough to forge a tight team win.

“We had a very competitive team this year and we pushed each other,” Rogers said. “And of course it all started with our coaches and the training they put us through. The coaches got us here in position to win the title.”

Rogers said he wants to study computer science and might try to walk-on at a college once he decides where to enroll. He changed his routine for this final race by sticking near the front of the pack at the outset, compared to other times when he’d fall back for the early sequence of the 5K route. It paid off when he separated at the end and won by a few hundred meters over Roberts and the field of over 130 competitors.

“I was surprised when they let him go,” said RHS coach Allen Correa. “He had run here at Baumholder a week ago and his time was two seconds off the course record so he was confident coming in. They all had hard workouts leading up to Euros and Dash was running close to five-minute miles. The whole group just really had a phenomenal season.”

“I’ve really enjoyed cross country because of how close we all are,” Purvis said. “If I’m still here next year, my goal is definitely to win the race.” Orlando Rojas and Griffen Parsells were the next top finishers for the KHS boys, who wound up third overall teamwise.

The girls’ Euro race was won by Abigail Michalec of St. John’s with a time of 19:00.58 and the top area runner was Ramstein’s Jordanne Hill. Her seventh-place finish helped Ramstein take third overall in the team standings. Jillian Do

nmoyer posted the top time for Kaiserslautern and Madison Brech was best for Baumholder.

“I knew this was going to be like some serious competition … I knew about a few from schools we’ve seen, but with some I was running with them for the first time,” said Ramstein’s Hill, a senior. “My goal was to make the top 10 and I did that.”

Host Baumholder lined up numerous volunteers to help stage a successful event that was heavily attended by spectators as well as over 200 contestants from across the DODEA school spectrum.

“It was a positive meet and we got a lot of help from many people here in the Baumholder community plus several others from Kaiserslautern, Ramstein, Stuttgart,” said BHS coach Todd Coyour.

Kaiserslautern freshman Aiva Schmitz arrived from Landstuhl Middle School with high advance billing and proved it to be true by smashing through the competition and winning the overall girls’ singles title at Wiesbaden last week.

“Getting past the nerves and playing as a freshman, I knew there were going to be lots of good players in this tournament,” said Schmitz, who is ranked No. 35 in Germany for U-14 players and in the overall top 500 German women. “We have amazing coaches and I’ve made so many new friends playing with KHS this season. It’s been great.”

Kaiserslautern was just a point away from winning the girls’ team crown, grabbing third place behind Wiesbaden and SHAPE, which tied for first place. Taylor Larned and Victoria Lopez advanced to play in the girls’ doubles finals while singles KHS No. 1 Mark Butler joined Olaitan Powdar and William Alsing in scoring multiple wins on the boys’ side of the pool play tournament.

Larned, a senior, paired with another freshman Landstuhl product Lopez to go undefeated in pool play. They then topped a tough SHAPE team in the semifinals before falling short in the championship match to Wiesbaden, the 2017 runner-up. All three girls earned first team All-Europe honors for their performance and Schmitz was awarded the Euros MVP award.

Schmitz won seven matches at Europeans including a 7-5, 6-1 championship victory over Wiesbaden’s Charlotte Kordonowy. That match and the doubles championship berth by Larned/Lopez concluded perhaps the best girls’ tennis season in KHS history. The squad had a 7-1 overall record, losing only to Wiesbaden in the regular season.

“This team is special, not just for their accomplishments on the courts, but their bond as a team,” said coach Elizabeth Quinn. “They are such a smart, grateful group of student-athletes that were an absolute joy to be with,”

Top Ramstein High netters at Euros were Ashlyn O’Connor with three singles wins and the duo of Connor Markus/Collin Kent with three doubles wins, but none of the Royals were able to advance past pool play.

The Ramstein Royals are heading into this weekend’s DODEA Division I championship game with an undefeated record and a head of steam following a 48-14 semifinal playoff win over Kaiserslautern.

Ramstein (7-0) will face Lakenheath (6-1) tomorrow night at Volgelweh in what will be the program’s third title game appearance under third-year coach Carter Hollenbeck. The Royals won the crown in 2016, lost to Stuttgart last year, and have advanced again.

Kaiserslautern had finals dreams of their own after gaining a berth in the DODEA semifinals, but had its work maximized by playing a Ramstein team it had already lost twice to in the regular season.

“The first half was extremely tight and we had a touchdown pass play called back for a penalty, but it was exactly the right call by the officials for an illegal block in the back,” said Duke Allen, first year KHS coach.

The Raiders were behind at one point 34-0 but responded with two touchdowns. The script played out similarly to how the first two meetings went, with Ramstein building big leads and holding the Raiders at bay in most all potential game-changing sequences.

Title games for Division II and III will take place earlier in the day at the KHS campus leading up to the Ramstein vs. Lakenheath clash. The Royals already hosted the Lancers in the regular season and won 40-0.

Ramstein and Stuttgart were the favorites in Division I as the Europeans Volleyball Championships opened. Both squads are undefeated and Stuttgart is the defending champion. The Europeans began Thursday and run through Saturday at various sites around the KMC.

This past weekend, Ramstein capped a 12-0 season with match wins over Kaiserslautern and Black Forest Academy. Baumholder had a tougher time in its match with Spangdahlem, falling in straight games 25-14, 25-22, 25-14.

KMC Attention retirees: The Next KMC Retiree Luncheon will be on Nov. 14, at the KMCC Food Court Activity Room,...