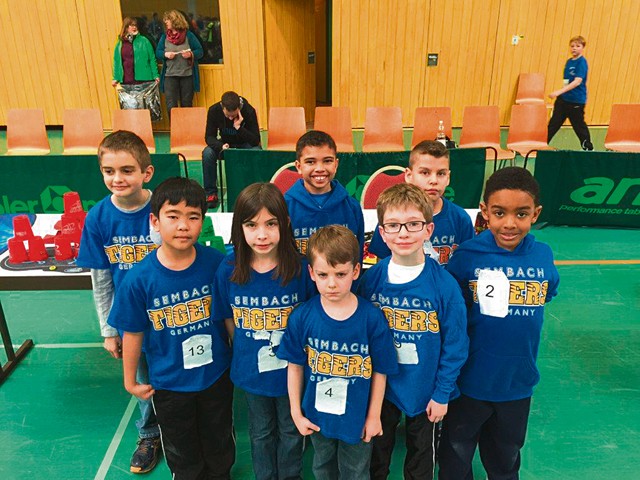 Students from Sembach Elementary School compete in the Stockstadt Regional Invitational Sport Stacking Tournament Jan. 16 in Stockstadt-am-Rhein, Germany. There were over 250 stackers at the tournament representing five countries, including Germany, Poland, the Czech Republic, Switzerland, and the Sembach Tigers represented the United States. This was the first year the Tigers were invited to the tournament, so they competed in the beginners tournament. Winners from the Sembach Tigers include: C.J. Webb with gold medals in the 3-3-3 and mixed relay; Robert Vano with gold medals for the Cycle and 3-6-3; and Sarah Brown with a silver medal in the Cycle. Winners from this tournament will go on to the World Sport Stacking Championships April 2 and 3 in Speichersdorf, Germany. From left to right, back row: Alexander Ellis, Shepherd Grimes and Isaiah Barta; middle row: Robert Vano, Sarah Brown, Hayden Harki and C.J. Webb; and front: Jason Brown.