Hunting trophies are not only sought after by hunters but also by people wanting to give their home that unique rustic touch. But is it difficult to get one back to the States if you acquire one over here in Europe? “There are generally no USDA restrictions on animal trophies […] 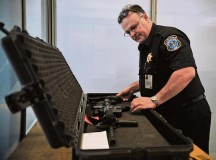 After a long flight to Ramstein, most people focus their minds on getting up to stretch, leaving the aircraft and meeting loved ones at the gate.

People thinking of sending Kinder Surprise chocolate eggs stateside this Easter should be aware of the U.S. Customs regulation banning these chocolates from import into the United States.
“U.S. Customs and Border Protection agents will remove Kinder Surprise chocolate eggs from your baggage or any package mailed stateside,” said Mike Dean of the U.S. European Command Customs Executive Agency.
Those who ship these eggs or similar products can be fined.

Know before you go this summer

People moving to the United States this summer should start preparing now by letting go of items banned from import, customs officials advise. It is also a good idea to apply early for import permits on restricted items.

Authorized U.S. citizens in Germany receive a variety of goods and products through the military postal system from family, friends and online retail companies in the states. The majority of the mail received is processed and made available to customers without interruption.