Talk of the Town is a series highlighting the union communities within the County of Kaiserslautern, the City of Kaiserslautern and the Union Community of Winnweiler in neighboring Donnersberg County. The series aims to inform American service members and their families about the communities they’re joining during their time in the KMC. A Union Community is an administrative territorial community composed of a group of individual towns or villages. Each month we will feature a different community and provide facts about its history, heritage, and the local experiences it offers.

Our next stop will lead us to the Union Community of Bruchmühllbach-Miesau, which lies on the western end of Kaiserslautern County and along the banks of the Glan River. We invite you to discover interesting and maybe not-so-well-known facts about your home away from home.

The total union community has about 10,400 inhabitants with about 100 Kaiserslautern Military Community families who also call it their home.

Mayor Erik Emich has been in office since 2016 and would like to extend a warm welcome (see below).

Bruchmühlbach-Miesau is the home of the Miesau Army Depot, which was founded in May 1949. At that time it served as a point to transport and store construction materials for military facilities nearby to the Glantal train station in neighboring Bahnhof Schönenberg-Kübelberg. Today it is used to store a multitude of military supplies and equipment.

Celts, Romans and a huge swamp

An old military and trading route existed in the area during prehistoric times. Celtic and Roman tribes settled on the edge of the “Bruch,” a swamp area, and the Westricher Hochfläche (Westrich highlands). Remnants of these early settlements can be found as grave mounds, coins, tools and also the menhir called “Römerstein” (Roman stone).

Administrative areas, referred to as a “Gau” were established during the Franconian Empire starting in the 4th century. During this period the Nahegau, Bliesgau and Wormsgau were within today’s boundaries of the union community. The individual “Gaus” came under the jurisdiction of the bishops of Mainz, Metz and Worms.

At about the beginning of the 12th century, the Kurpfalz region, the Pfalz-Zweibrücken region and Sickingen County all ran together at Bruchmühlbach-Miesau. Due to swampy geological terrain at that time, there were hundreds of ponds and lakes and many families made a living out of breeding fish or handcrafting angler’s equipment. Others in dryer areas were farmers or craftsmen.

From an emperor’s road to a customs hub

Many changes occurred at the beginning of the 19th century when Emperor Napoleon I (Bonaparte) conquered the area and constructed a permanent road, commonly known as Kaiserstrasse (emperor’s road), today’s L395. The road served as a strategic military road. Along the road businesses selling horse wagons boomed and guest houses and inns flourished. The “Alte Posthalterei” (old postal office) developed into a busy mail hub with a lodging facility where Napoleon stayed overnight on numerous occasions.

The times after World War I and II

A very popular summer spot is a pool called the “Warmfreibad,” which is located idyllically in the middle of green. You can enjoy the sun, just relax in the large sunbathing area under the shade of the trees and take a break from your daily routine. There are a number of options for young guests, such as a wide wavy slide and a current canal as well as splashing pools for the younger ones. And the water temperature is at least 24 C (75 F).

In addition, there are a number of clubs and associations, such as soccer, tennis, horseback riding and bow and arrow shooting. Join in and meet some German neighbors and friends.

Clean until you open a museum!

You can really clean up at the Staubsauger Museum in Miesau. This vacuum cleaner museum features a wide selection of vacuum models throughout the decades. Since 1990 Alois Steffgen has been a specialist for cleaning and vacuuming technology and during his career he was inspired to open a museum. For example, in 1993 he received an inquiry from an 83-year-old carpenter who had a model Nilfisk S 59 vacuum cleaner that ran on 210 watts. He had bought the machine from his boss in the 1930s. As he couldn’t take it with him when fleeing during World War II, he buried it in the garden for a year. Vacuum cleaners were a luxury in the early 1900s and especially after World War II. Upon his return he dug it out, and although it was somewhat rusty, it still worked, and he used it until 1993. Admission is free, but a booking is requested at alois.steffgen@haste-innovation.de.

There are several exciting biking and mountain biking trails that start in Bruchmühlbach-Miesau. The Fritz-Claus-Hütte Burg Nanstein Loop, the Panarama View Mirador-Ziegelberg Loop and the Höcherturm – Ohmbachsee Loop are a few examples. 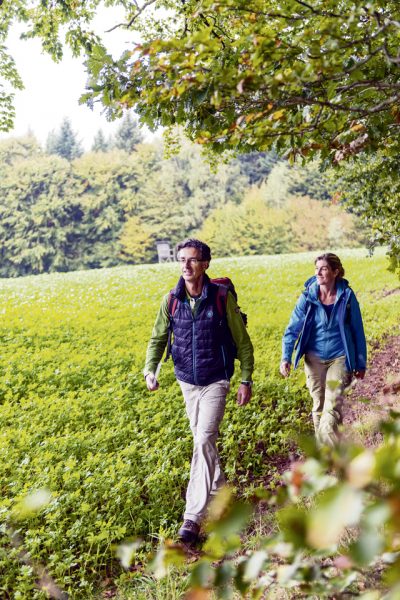 In addition, hiking enthusiasts have several picturesque trails to choose from. The Natural Habitat Elendsklamm is a certified and recommended German route. The 5,7-km-long circular hiking trail will lead you through an impressing “jungle” with rare animals and plants within a unique habitat. The trail leads over the Sickinger Höhe at the beginning and is well- equipped and secured with bridges, railings, and steps. When hiking in late autumn or winter weatherproof attire is advised. In summer, the trail offers a cool refreshment on hot days. Hikers are advised to take a GPS system or a map and refreshments with them. For further trails, https://www.tourismus-vgbm.de/draussen-aktiv/radfahren and https://www.tourismus-vgbm.de/draussen-aktiv/wandern/.

When the Riding and Driving Club in Miesau held its first tournament on a makeshift dirt track within today’s Miesau Army Depot premises on Pentecost Monday in 1922, little could it know that the races would develop and become well-known throughout Germany. Three years later, a spectators’ grandstand was completed, and races took place every Pentecost weekend up to the war. The track was destroyed during the war and therefore the club concentrated on dressage and show jumping tournaments afterwards. In 1974 races commenced again and have drawn riders and crowds from near and far. Tournaments take place every year on the Pentecostal weekend in May or June and you can bet that the event has developed into one of the leading equestrian festivities in Germany.

The small museum on the former hayloft in Lambsborn displays several historic agricultural tools and objects traditionally used on a farm for centuries. At the vintage farmhouse you can enjoy hands-on experiences of the life and times of a farmer and get a glimpse of potatoes, schnapps distilling and its history.

Or you might want to visit a traditional mill. The Tausend Mühle in Bruchmühlbach is one of the last grain mills in the region and looks upon a 400-year ever changing history. The mill built in 1598 had a total of 26 owners, some of them rather obscure and whimsical people, who carried out their tasks as millers in a “hit or miss” way. Up to a few years ago the mill was operated by the Frank family and delivered products to many bakeries in the region. Today the mill complex houses a small mill store where you can buy flour and regional culinary specialties. The mill is also located along the “Sagenhafter Waldpfad,” which means you can combine a visit with a leisure hike. https://www.tourismus-vgbm.de/kultur-tradition/muehlen/

The town offers a number of scenic historical farmhouses and you definitely won’t go hungry in any of the restaurants, cafes and beer gardens. You can also enjoy shopping in one of the quaint stores. For a longer stay, there are several cozy log cabin huts that offer accommodation and regional specialties. https://www.tourismus-vgbm.de/bleiben-geniessen/huettenzauber/

The residents of Bruchmühl-bach-Miesau greatly enjoy festivities and events. The Wikingerfest in Elschbach in mid-September is a highlight. It invites you to step back into the wild days of the Vikings and experience games where ferocious men and women in traditional attire hurl stones and compete in tug-of-war or carry around the Viking chief. Other events include a traditional “Kerwe,” a village fest in every individual town or village as well as in Miesau at the end of October. The Nikolausmarkt on the first Sunday in December in Bruchmühlbach and the Christmas Market on the second Advent weekend in Miesau, as well as smaller markets in the individual villages, get you into the holiday spirit.

Cordial welcome to the Union Community of Bruchmühlbach-Miesau!

It is wonderful that you have chosen your home away from home in one of our towns or villages.  We offer a number of active leisure activites in our enchanting landscape:  Whether in the Westrichter Moorniederung (bog lowlands) or at Sickinger Höhe.

After a scenic bike tour or a hike, you can experience sociable moments when stepping into a typical and cozy Pfälzer Hütte (cottage).

We invite you to become acquainted with our traditions at Kerwen, summer or village festivals where you can also come into contact with locals.  This is also true for our many offers of our clubs and associations where new members are always welcome.

You can find anything you require for your daily needs in the shops and stores within the union community and, in addition, our Hofläden (traditional farm shops) offer delicious regional products directly from local businesses.

Our staff at the administration is happy to support you with advice and help you get acquainted and quickly settled in in our community.  Visit us online at www.bruchmuehlbach-miesau.de

I’m very pleased that you have found a second home, have made new friends and created fond memories within the Union Community of Bruchmühlbach-Miesau that will remain in your hearts in the future.