Talk of the Town is a series highlighting the union communities within the County of Kaiserslautern, the City of Kaiserslautern and the Union Community of Winnweiler in neighboring Donnersberg County. The series aims to inform American service members and their families about the communities they’re joining during their time in the KMC. A Union Community is an administrative territorial community composed of a group of individual towns or villages. Each month we will feature a different community and provide facts about its history, heritage, and the local experiences it offers.

Our next stop will lead us to the Union Community of Otterbach-Otterberg and we invite you to discover interesting and maybe not-so-well-known facts about your home away from home. 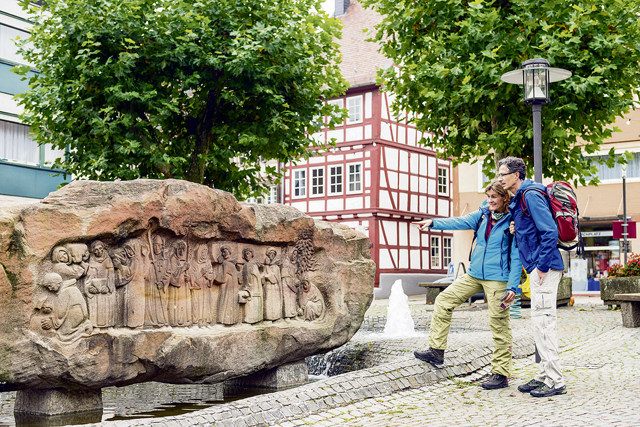 The total union community has 20,000 inhabitants and about 300 American families also call it their home.

A Game of Thrones

Otterberg has an eventful history and in the year 1145 the Cistercians (a Catholic order of monks) founded an abbey in Otterberg. The Cistercians preferred building in river valleys or in swampy areas, and as a sign of their humility and purity they began with the construction of the monastery at the Otterbach (stream). The large monastic church, formerly part of the Cistercian monastery, was built between 1168 and 1254. The church is the most prominent landmark and is the largest sacral building in its original form in Rheinland-Pfalz, and is located right next to the Otterberg historic district. After the Protestant Reformation the monastery was abandoned and left to slowly decay. 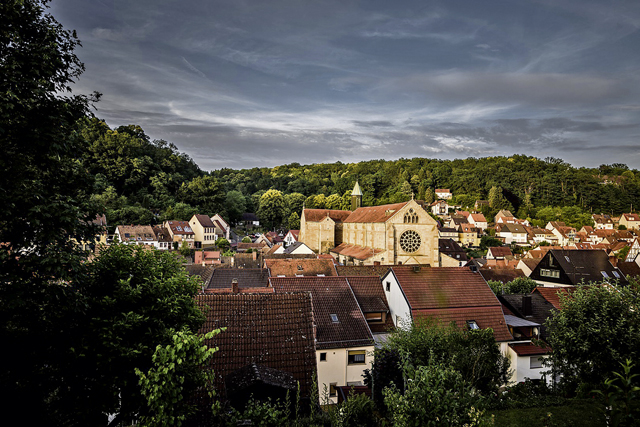 From 1159 to 1592 Otterberg belonged to Pfalz-Lautern (Imperial Lautern) and was then turned over as part of the Kurpfalz (Imperial Palatinate) at the end of the 18th century. From 1798 to 1814 it was part of the French Republic and was then handed over to the Austrian emperor. After World War II, in 1947, it was integrated into the newly formed State of Rheinland-Pfalz.

Otterbach, on the other hand, with the town mainly situated along the Lauter River in the Lautertal, has a completely different history. In the Middle Ages the Cisterian monastery owned property as well as a grazing authorization in Otterbach. Up until the end of the 18th century the community belonged to the Leyen family. Of note, from Nov. 28 – 30, 1793, the community was partially the scene of the Battle of Kaiserslautern against French troops, which was a battle of the War of the First Coalition, part of the French Revolutionary Wars.

Otterberg – City of the Walloons with charm and tradition

In the year 1579 Palatinate Count Johann Casimir allowed religious refugees from the Spanish Netherlands, exiled Calvinists referred to as Walloons, to settle on the premises of the abandoned monastery. In a decree he defined that certain parts of the monastery complex could be used to build new houses, while other sections were preserved such as the church, the chapter house, and the abbey house. Initially 400 individuals were settled in the refugee encampment, but the industrious community quickly grew and only two years later, in 1581, Otterberg was granted city rights with a population of 1,600. 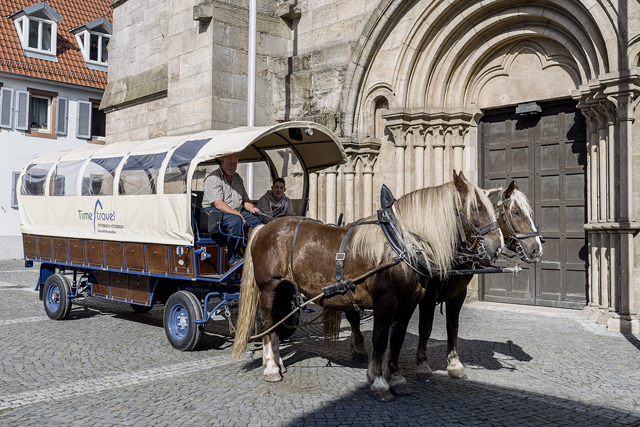 Isidor Straus was born in Otterberg in 1845 and emigrated to the U.S. with his Jewish merchant family in 1853. The family settled in Talbotton, Georgia, where his father opened a store. In 1874 his father took over the porcelain part of H. R. Macy’s Department store in New York City and in 1888 Isidor and his brother Nathan became co-owners of the store. Isidor also served as Democratic representative in the House of Representatives in the 1890’s. Tragically, Isidor and his wife Ida died during their return trip from a vacation in Europe on board the legendary Titanic in April 1912.

The most prominent landmark in Otterberg is the Abbey Church, which offers concerts and outdoor activities on the church square. The square features a granite sculpture of historic life and times in the city. The neighboring Altstadt, or historic area, is great for strolling and dipping into the age of the Walloons who left their mark with gorgeous and well-preserved semi-timbered houses. For details and a map of the historic buildings, visit: http://www.otterberg.de/sehenswert.

You can also get an authentic feel of a covered wagon ride on a virtual tour of the former monastery, which can be booked under https://www.otterbach-otterberg.de/tourismus-freizeit/gaestefuehrungen/time-travel/.

The Stadtmuseum offers insight to the history of the town and a special section is dedicated to Isidor Straus, the most prominent Otterberger.

Leaping back into the 20th century, visit the Motorrad Museum in Otterbach. Since 1980, Heinz Luthringhauser has offered a permanent display of historically important motorcycles. The museum is in the former Protestant church in Otterbach where founder and motorbike race legend, Luthringhauser acted as director until his death in 1997. Among other prizes, Luthringhauser won the Tourist Trophy (TT) in 1974, the toughest road race on the Isle of Man. He collected 80 years of motorcycle history in flawless condition. The display includes German, Italian, British and Japanese models and the development of engines.

In the year 1911 the signal tower for changing railway switches was opened at the train station at Lampertsmühle-Otterbach. With increased train services, for example, transporting sandstone from nearby quarries, more mobility and prosperity was available to the town at that time. Since the machinery was switched to a modern electronic system in 2005, the switching station is no longer used. The impressive mechanical devices with pulleys and antiquated signals can be viewed in the Stellwerk Museum, tours are available upon request at: https://www.otterbach-otterberg.de/tourismus-freizeit/museen-und-ausstellungen/stellwerkmuseum/

Theater and musicals in the middle of nature

Musical and nature enthusiasts might enjoy visiting the Freilichtbühne in Katzweiler, a stage in the middle of the forest since 1951. After a two year break, the stage is opening this year and offering performances of “Sams” (a week full of Saturdays) and “Urmel aus dem Eis” (Urmel from the ice) for children and families as well as “Zoom,” a musical featuring hits from the 1980s, in its evening performances. More information can be found here: https://www.freilichtspiele-katzweiler.de/stuecke

Space walk – What time is it?

The Planetenweg (planet path) starting from Heiligenmoschel leads you on a walk from Pluto past all of the planets in our solar system up to the sun, in exact relation to each other. Enjoy a walk in “outer space” with each planet marked with an information table. The complete path is 7.3 km long with a fantastic panoramic view of the north Palatinate.

At the end you will encounter a walkable sundial (Sonnenuhr) with 12 obelisks made out of local sandstone on Reiserberg between Heiligenmoschel, Schneckenhausen, Schallodenbach and Niederkirchen. Visitors will notice that the structure comprised of 12 large stones in a circle on a hill very much resembles Stonehenge in England. While the circle in England is 4,000 years old and had religious character, this structure is much younger and symbolizes the 12 individual towns in the union community growing together. The sandstone tells a story of itself, about residents making a living out of chipping out stones and of long gone days with sea and river sediment from 290 million years ago. There is a slanted steel column in the middle and each obelisk has the coat of arms of one of the villages, as well as the digit of the hour. Try reading the time of the day without using electronic equipment!

There are various restaurants and pubs in the picturesque old buildings, music events take place throughout the year. You can catch classic and Christmas concerts held in the Abbey Church. A Walloon Fair takes place each July with vendors offering goods and a colorful entertainment program. The monastery herb gardens are open for the public every second Sunday during the summer. A Halloween event is planned for Oct. 31 and the traditional Christmas Market will take place in front of the church every Saturday during the holiday season. This year the Frühlingfest (Spring Festival) is scheduled for June 11 and 12. Don’t miss out on the colorful costumes and the parade on Sunday, June 12.

Letter from the Mayor

I would like to extend a cordial welcome to the Union Community of Otterbach-Otterberg!

I am pleased to discover that you have decided to make a home in one of our 12 communities. You have made the perfect choice, as on one hand, you are in close vicinity to the regional center, the City of Kaiserslautern, and on the other hand, you can experience nature in a village.

Our wonderful landscape with forests, slopes in the Pfälzer Bergland (Palatinate hills) and picturesque river valleys offer diverse leisure activities. Not only our quality hiking routes and well constructed biking paths are a paradise for active sportsmen, but our many festivals and cultural events bring the people in our union community together.

At this same time we invite you to use the opportunty to join any of our future oriented clubs and associations and get to know local people at your home away from home. In our clubs we have a wide variety of courses, workshops, sports and exercise activities, sometimes not even found in larger cities and for affordable prices.

A multitude of stores, markets, service companies and craft businesses provide a unique quality of living.

We would like you to feel comfortable in our community. Please feel free to contact our admin staff or your local village mayor directly for further information or visit https://www.otterbach-otterberg.de.