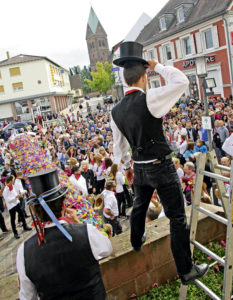 Many members of the Kaiserslautern Military Com-munity have found temporary or even permanent homes in one of the many villages and towns surrounding Kaiserslautern or in the heart of the Palatinate Forest.

Talk of the Town is a series highlighting the union communities within the County of Kaiserslautern, the City of Kaiserslautern and the Union Community of Winnweiler in neighboring Donnersberg County. The series aims to inform American service members and their families about the communities they’re joining during their time in the KMC. Each month we will feature a different community and provide facts about its history, heritage, and the local experiences it offers. A Union Community is an administrative territorial community composed of a group of individual towns or villages.

Our series will kick off with the introduction of the Union Community of Ramstein-Miesenbach and invite you to discover interesting facts about your home away from home.

With Ramstein Air Base being located within its boundaries, the union community is host to the largest air base in Europe, with organizations such as the 86th Airlift Wing, U.S. Air Forces in Europe and Air Forces Africa, Third Air Force, NATO Headquarters and a number of international tenant tunits.

The Mayor of the Union Community, Ralf Hechler, has been in office since 2016 and would like to extend a warm welcome (see below).

Romans to a runway

Ramstein was first officially mentioned in a certificate dated June 2, 1215, when emperor Friedrich II, grandson of Friedrich Barbarossa, granted the patronage of the mother church to Ramstein and of two daughter churches in Weilerbach and Spesbach to Reinhard of Lautern. In the late 14th century Ramstein became a part of the “Kurpfalz” (Electoral Palatinate) as a part of Bavaria. The years after World War II and in particular the establishment of the air base in 1951, initiated by the French forces, brought about many economic and social changes. Ramstein village had to surrender about one third of its 4300 hectares of premises for the construction of the air base. In 1969, Ramstein and Miesenbach fused into one community, and in 1991 the City of Ramstein-Miesenbach was given its city rights.

While there were about 2,000 inhabitants in Ramstein in the early 1900s, today’s population in the total union community is about 17,800, which in addition is also home to approximately 7,800 members of the Kaiserslautern Military Community (U.S. and NATO). 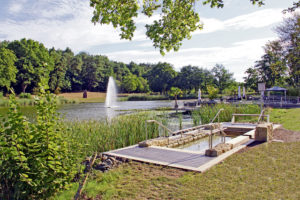 Hikes, bikes and other outdoor likes

The Union Community of Ramstein-Miesenbach offers a multitude of leisure activities. Hikes through the Palatinate Forest and moorland, the AZUR Freizeitbad offers aqua fun for young and old, including outdoor and indoor pools and a sauna facility the year around. Biking trails, for example a stretch along Barbarossa Radweg or Sickinger Mühlenradweg offer nature and an experience of the Palatinate Forest. The Pfälzer Seentour biking trail leads you to the lakes and ponds of the western Palatinate on a 62 km tour, which can be cycled on individual partial routes.

The Seewoog in Miesenbach is the ideal venue for a stroll around the lake, offers a picnic and grill area and a playground for children. A kiosk serves food and drinks on the lake terrace and in the summer months concerts may also take place for a relaxing musical afternoon.

An array of sports and culture clubs offer activities ranging from soccer to gymnastics and yoga, musical orchestras and choruses, film and photo fun, a voluntary fire department, a chess club and even a garden and floristic association, to name a few.

The Congress Center Ramstein is the cultural and conference center of the city. Besides adaptable rooms with a seating capacity for up to 800 people and modern conference equipment, the facility offers a varied entertainment and event program. The in-house restaurant “Die Bühne / Backstage” provides catering for each occasion. The Museum im Westrich in the former townhall has historic artefacts on display. The Docu Center Ramstein, established in an assortment of containers, is dedicated to documenting the history of Americans in Rheinland-Pfalz since 1945. It recently curated its exhibition “Stayed,” about Americans who remained in the area, to the Stadtmuseum Kaiserslautern and is on display until Apr. 10. The Stadtbücherei (library) has a broad selection of books and magazines, and offers readings and handcraft afternoons for children. 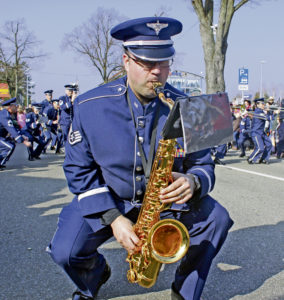 There is a wide range of restaurants and cafés offer differing gastronomic delights for every taste. A quaint shopping and strolling area leads you along historic buildings and holds surprises, such as the Marktbrunnen (fountain) in front of the historic city hall, along the way.

Prominent festivals are the “Seewoogfest” in June, the “Ramstein Summernights” at the CCR, the German-American Friendship Fest, the “Kerwe” in September, the Farmers Market in October, the “Wendelinusmarket” and Oktoberfest in October, and the Nikolaus Market in early December. Ramstein also normally hosts the largest Fasching Parade in the Westpfalz region and draws up to 30.000 spectators, with KMC participation, such as the funky USAFE Band, and various interest groups. Organizations from neighboring France and other communities truly make this an exciting and fun-filled event with international spirit.

Seventy years ago the first American troops arrived in our community. Since then, “Ramstein, Germany” has become the hometown of millions of US military members and their families and a familiar name for many Americans. Numerous friendships and connections were made during the course of time. Thousands of Americans have returned to our region as visitors, some of them to stay forever. The close ties between the people of our nations are certainly a significant characteristic of our region.

Germans, Americans and people of other NATO nations work together, live door-to-door in our communities, celebrate the same festivities and share the same values. These daily opportunities to unite between various nations are vital for a friendly relationship and mutual understanding.

Therefore, I would like to encourage our American and international guests to reach out to the people of their “host nation” in the future as well. Visit our fests, make good use of our offers to join clubs, visit our shops, restaurants and leisure facilities and experience our wonderful landscape while biking, hiking or on a family excursion.

If you have any further questions about Ramstein-Miesenbach, please visit our “Window to Rheinland-Pfalz” information counter, located in the KMCC on Ramstein Air Base. Or check our English website https://www.ramstein-gateway.com. We are looking forward to welcoming you!