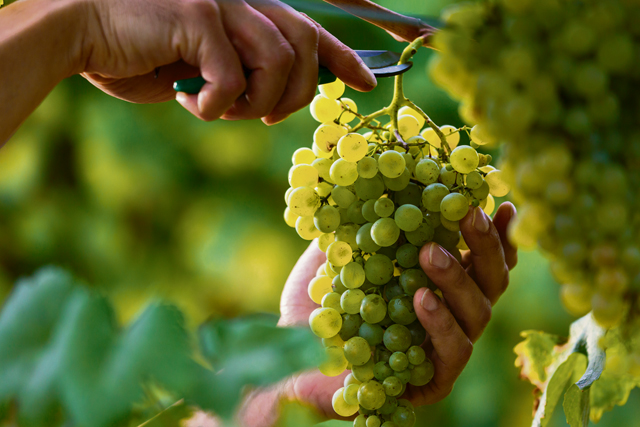 Germany is one of Europe’s largest winegrowing countries.

From September to early December, the harvest season sees wine fests of all sizes in almost every town.

The Moselle and Saar valleys, both in Rheinland-Pfalz, along with Rheinhessen in the north has the largest viticulture area in Germany and makes up about two-thirds of the German winegrowing regions. Most of the vineyards are on or very close to the 50th latitude, which is rather unusual in international comparison. High quality and successful viticulture is only possible based on a special unique meso and micro climate condition.

The “Deutsche Weinstrasse” (German wine road) stretches 85 kilometers from Rheinhessen in the north to the French Alsace region in the southwest and ends at Deutsches Weintor (wine gate). Many famous towns such as Bad Dürkheim, Neustadt and Landau lie along the way and the region is renowned for vineyards as far as the eye can see on flat plains in close proximity to the Rhine River. The special mild climate zone provides 1.800 hours of sun a year.

Another famous viticulture region is along the Moselle and Saar rivers, but on steep slopes with up to 60 percent inclines. Approximately 60 million vines grow along the steep hills where the winding rivers reflect sunlight onto the slopes and warm the vines to ripen to a plentiful harvest.

The Celts were the first to cultivate white grapes along the banks and slopes of the Moselle river almost 3000 years ago. The Romans refined the winemaking process, improved the quality and eventually introduced darker red grapes. As wine consumption of the Romans grew along with the empire throughout the centuries, soldiers and civil servants were paid with wine, rather than coins, and even slaves received a daily ration. This quickly led to the tasty liquid evolving into a well-traded and precious commodity.

September marks the beginning of the harvest season. Large state-of-the art grape harvesters can pick the grapes on even surfaces. The machines are able to pull the actual grape fruits off the small twigs and leaves by shaking and rattling them before they are conveyed to a large container. However, the vineyards on the steep slopes of the Moselle and Rhine Rivers have to be picked by hand, a very tedious and back-aching task, with thousands of harvesters working with century old techniques.

Grapes are stomped by foot in a traditional method during the Kelterfest in Piesport along the Moselle River. Former wine queen Martina Servaty even stomped herself into the Guinness Book of World Records when she pressed 12.76 liters (3.3 gallons) of juice out of a barrel with 50 kilograms (110 pounds) of grapes.

After the initial grape pressing process, also known as keltering, the premier wine produced is called “Federweisser” (feather white) because of its milky, white color. Although very sweet in taste, it also has a high alcohol content and is often sold in containers in little booths along the road side.

A tradition that comes with the season is delicious and spicy “Zwiebelkuchen” (onion cake) together with the semi-processed wine. The warm dish, more of a quiche than a typical cake, with onions and bacon bits, is a perfect complement to the fizzy new wine. Freshly pressed, pure and sweet grape juice is also a perfect alternative for those that prefer a non-alcoholic delight.

After the first winter frost in late November or early December, the very last grapes are handpicked and processed into a sweet, rare and expensive “Eiswein” (ice wine).

Wine festivals take place in almost every village throughout the season and Neustadt/Weinstrasse is the host of the German Weinlese Fest (wine harvest fest) with a parade and a wine village set up with wooden booths to celebrate the harvest season. The German Weinkönigin (wine queen), required to have a broad knowledge of the different types of grapes and wines and their making, is crowned for a year. Bad Dürkheim has the world’s largest wine fest and Landau holds the “Fest des Federweissen” (Federweisser festival), both in October.