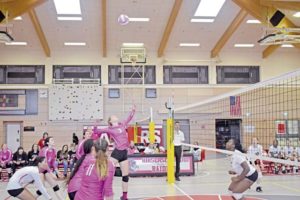 Even though Kaiserslautern had all six players ready for the action, as shown below, they could not keep up with Stuttgart’s dynamic front court and overall athleticism and dropped their contest with the Panthers in straight sets 25-12, 25-21, and 25-17. The Raiders opened the day by sweeping SHAPE 25-23, 25-17 and 25-15 before facing the relentless pounding of the strong Stuttgart front court.

“Overall it was a productive Saturday,” said head coach Aaron Scalise. “After playing well against SHAPE, we played really well at times against Stuttgart, but it wasn’t meant to be for us. We certainly had our chances but Stuttgart seemed to have better court awareness and made some spectacular plays.  Stuttgart seemed to play with greater urgency.”

The Raiders were led offensively by Rebecca Lagares and Makenna Zielske while Gina Popovic and Kayla Dyer sparked the defense.

For Ramstein, the week off was much needed and very therapeutic. The Royals followed up a rather lackluster appearance two weeks ago by sweeping Lakenheath 25-11, 25-10 and 25-12 in Wiesbaden. Jumping jack Gigi Stake led the attack with 12 kills and five aces. Isabelle Coddington had 10 aces and 24 assists. It was their second victory over the Lancers this fall.

In the second contest, Ramstein continued its resurgence and womped the homestanding Warriors 25-10, 25-14, 25-14. Isabelle Coddington recorded 22 assists, including eight for kills to Tamiya Bruce, and libero Lydia Coddington had 10 digs.

“Over the past two weeks the team has really been working on their individual roles. Every single girl on our roster played and contributed to our wins,” said head coach Kandel Baxter. “We really have been looking at communication and the mental game. We knew what we needed to accomplish today and executed our game plan.”

Kaiserslautern is at Lakenheath this weekend where a victory assures a winning season.

The Royals will host a “double-header” against the Vilseck both tonight and tomorrow morning.