The United Service Organizations recently announced who would accompany the Chairman of the Joint Chiefs of Staff, Gen. Joseph F. Dunford Jr., during this year’s Holiday Tour when it comes to Ramstein Wednesday.

The host of this year’s show is actress Elizabeth Banks of “The Hunger Games” and “Pitch Perfect,” who will introduce the musical acts, which include: rocker Chris Daughtry and country singers Kyle Jacobs, Brett James, and Billy Montana.

Steven Wright and Heath Hembree, pitchers for the Boston Red Sox, will also be on the tour.

The free show starts at 5 p.m. Wednesday. It will be held in Hangar 3 on Ramstein. Doors open at 3:30 p.m. and admission is on a first-come, first-served basis.

Beginning at 3 p.m., a shuttle bus will be available to bring people from Ramstein’s North Chapel parking lot to the show.

The annual Holiday Tour, a joint venture between the USO and the Chairman of the Joint Chiefs of Staff, provides U.S. military personnel and their families with free entertainment and shows while also giving America’s highest ranking military officer a chance to interact with service members directly.

The tour lineup and attendees are subject to change based on unforeseen circumstances. 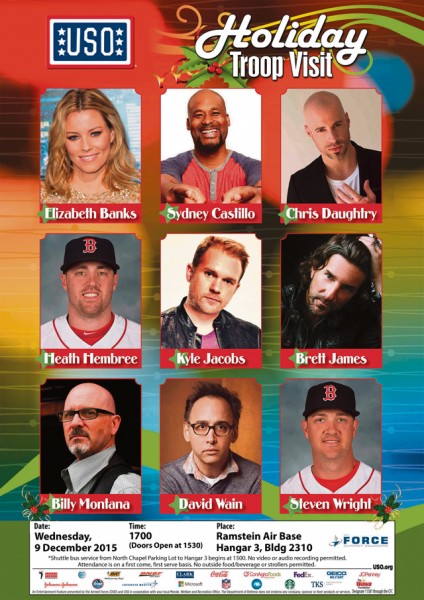